The Democratic Alliance (DA) notes the fact that the ANC has stolen our election slogan: "One South Africa for All’ which we launched in April 2018. The ANC stole the slogan for their birthday celebration collateral.

The DA has chosen the slogan "One South Africa for All" because we are the only party that is still committed to achieving non-racial ideals in South Africa. We have committed ourselves to effective redress, growing the economy in order to create jobs, creating safe communities and ensuring stringent property rights. The ANC is the antithesis of these very values. 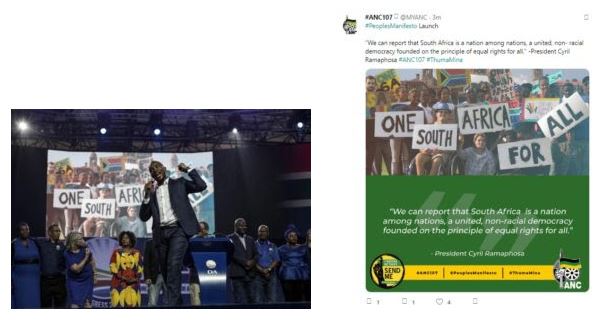 The DA will now consult our lawyers on this infringement. It is not that we are not pleasantly surprised that the ANC has finally awakened to the need to build a country where all can live and belong in, it is the fact that they couldn’t be further from that ideal which is an issue.

Not only is this dishonesty, it is also an insult to the South African public. The ANC has moved furthest from Nelson Mandela’s dream of building a non-racial country.

The ANC has repeatedly made use of racial division tactics in the country. They have, along with the EFF, stoked racial tensions for political expediency. The DA stands alone in upholding Madiba’s dream of a South Africa that we can all belong in.

Just today, the ANC honoured Peter Mokaba, led by President Cyril Ramaphosa, the very person who coined the term ‘Kill the boers’. This, among various other reasons, displays the ANC’s disdain for a united South Africa that embraces our diversity but also acknowledges the inequality caused by apartheid.

We will now consult our lawyers in order to ascertain what our recourse can be.

The DA will remain committed to building One South Africa for All.

The ANC today denied that it stole the Democratic Alliance’s (DA) Election slogan, “One South Africa for All”, for its birthday celebrations. The party instead offered a ridiculous explanation stating that it is not possible for the ANC to steal the DA’s election slogan, as we have not yet launched our election campaign. This is rather pathetic even by ANC standards.

The DA would like to save the ANC from further embarrassment and remind them that we did in fact launch our election campaign on 22 September 2018.

We chose the slogan "One South Africa for All" because we are the only party that is still committed to achieving Nelson Mandela’s ideals of a non-racial and inclusive South Africa.

The ANC is the antithesis of “One South Africa for All” and it is pitiful that the governing party would stoop so low as to brazenly stealing another party’s election slogan. The commitment to building this country goes far deeper than simply stealing a slogan. It requires real commitment to effective redress, growing the economy in order to create jobs, creating safe communities and ensuring solid property rights for all South Africans.

These values have become a thing of the past for the ANC.

The ANC’s admission that it is no longer capable of providing leadership to the people of South Africa on key issues only reinforces that only a DA government is really capable of Building One South Africa for all. 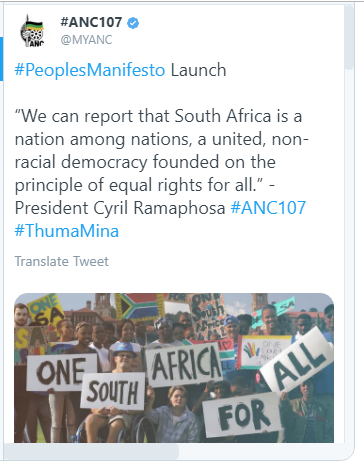 This is who Ramaphosa should sack next - Solly Malatsi