The civil rights organisation AfriForum finds it regrettable that an outburst with an apparent racial undertone happened during a SuperSport broadcast last night. AfriForum believes in a society where mutual recognition and respect between communities are promoted. Yesterday evening’s incident, however, can only exacerbate racial polarisation.

According to Kallie Kriel, CEO of AfriForum, it is especially worrisome that Tokozile Xasa, Minister van Sport, and DA leader Mmusi Maimane – in their reaction to this regrettable incident – have already decided that Naas Botha and Nick Mallet should carry the blame. This despite no investigation into the incident yet. “AfriForum regrets that anti-white sentiment in the country is already so rife that white people are automatically blamed for whatever goes wrong,” Kriel concludes. 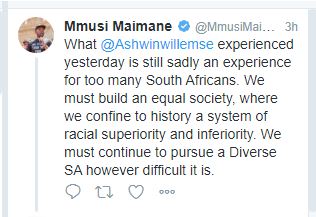 Kallie Kriel & the 'apartheid as a crime against humanity' question