AfriForum Youth laid a complaint of inciting violence and racism against a student of the Central University of Technology (CUT) on 20 February 2020 at the Park Road police station. The student, Boitumelo Mokobe, threatened on social media to burn five white students after the radio station OFM had described students as violent and destructive.

“We demand that the CUT’s management immediately act against students who make themselves guilty of racism and threaten to hurt others. It is unacceptable that the safety of students on campuses are threatened by fellow students,” says Chantelle du Preez, AfriForum Youth’s Coordinator for Tertiary Institutions.

AfriForum Youth will continue to apply pressure to protect students’ rights to be educated in a safe environment without demonstrating students disrupting campuses.

RACIST THREATS MADE BY CUT STUDENTS ON SOCIAL MEDIA

AfriForum Youth would like to express our complete disgust regarding the statements made by disgruntled protesting students on social media. I have attached the relevant screenshots to this letter. One of our members who is a CUT student has laid a charge of incitement of violence and racism against Boitumelo Mokobe at Parkweg Police Station as many students fear that these threats could indeed be carried out

We ask that these individuals: 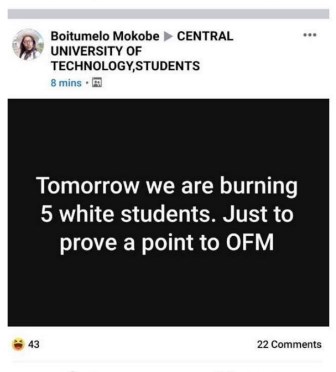 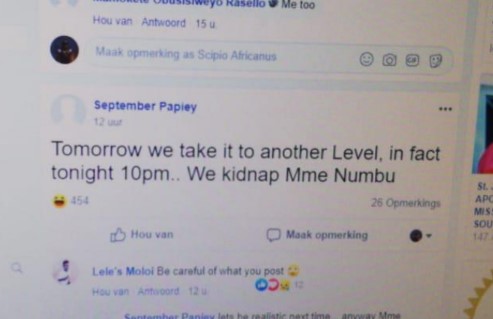 who have made these threats – should they be registered students at your institution – be investigated for committing hate speech and misconduct with regard to CUT’s Code of Conduct.

We also ask that you kindly enlighten us on CUT’s stance regarding such statements if made by students and the necessary disciplinary procedures that will be followed in order to hold these individuals accountable for their actions.

We also ask that you continue to implement the necessary security measures to adhere to the court interdict that CUT has in order to prioritise the safety of students and staff who are there to attend classes and ensure that the academic programme continues without disruption.

We would appreciate your detailed feedback regarding the above-mentioned matter by no later than 12:00 on Wednesday 26 February 2020.

Statue of President M.T. Steyn to be removed from UFS campus - AfriForum Youth