Yesterday, Hellen Zille went on Twitter to ask whether the Cape Town Fires are accidental or coincidental?

Her question was of course a precursor to the real political gamesmanship, which is that these Fires are not accidental and that the ANC, for some incomprehensible reason, is behind them. As ridiculous as this may sound, the DA leadership has now actually gone on to say people wearing ANC T-shirts were found setting up fires in the Boland region. 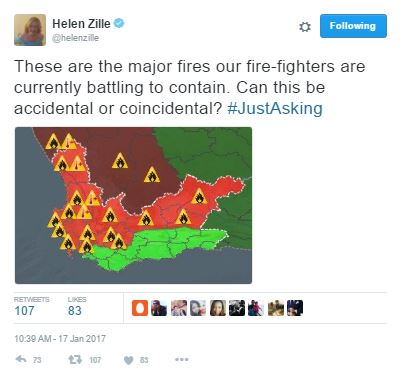 The reason for this gamesmanship is of course to deflect the default and commonsensical question, 'why is the DA government always found unprepared for the FIRE season'. It does come every year.

Importantly the ANC and ordinary people have pointed out a few things to her.

2. If she is accusing arsonists and deliberate actions behind these fires, why would they target the same time every year.

3. More importantly, fires generally are a result of an exothermic reaction. They tend to not have any hidden agendas.

What is more important for Helen Zille and her team is to accept that they are sleeping at the wheel and every year they are found to have failed to adequately prepare for this season. If they were fit to govern, They would have rallied even the resources of the whole country if they must.

Our people are not safe with the DA in charge and with each year, this is becoming more evident.

No proof of politics behind Cape fires - WC disaster head

Where are black fathers in South Africa?

A perspective on the Afrikaner talks with the Mbeki Foundation

The ANC and the Great China Illusion

SLR: SA must get out of its own way and deal with John Hlophe now