THE ANC STATEMENT ON DA RACISM

The DA mask of racism is gradually slipping thus revealing what the DA stands for while masquerading as a an inclusive party. It's racist bigotry is no longer disguised. This is evident given what the likes of the DA MP Dianne Kohler Barnard has posted. What confirms the complicity of the DA as a party is its conspicuous silence on the matter and the fact that there has not even been a public censure of their representative in parliament. The DA remains unconstructed racists.

The arrogance of the DA parliamentarian for calling for return of the painful and dehumanizing system of apartheid administered by PW Botha proves beyond doubt that the DA is the bastion of racism which took over from the National Party post 1994.

Incidentally this is a repeat of the remarks made by Alister Sparks who described the founding father of apartheid in the same vein as Hellen Zille, when addressing the congress of DA. The same can be said of the contemptuous racist insult by Mike Waters of the DA who depicted ANC voters as dogs last year. Nobody can deny that the majority of ANC voters derive from those who were collectively degraded and brutalized by apartheid state and their vast majority are black.

This racist narrative of the DA is at the centre of DA values that have been camouflaged by renting blacks as a public relations exercise and to confuse voters. It is not a mistake that DA is using National Party strategy of employing black sellouts who are marketing agents of white rule and apologists of apartheid. The political DNA of the DA derives from the erstwhile NP and the DA its successor.

We will not be surprised that no action will be taken against these characters as they are the defining constituency of DA. The window dressers of DA in the likes of Maimane will remain the captured lot with no decision making powers. 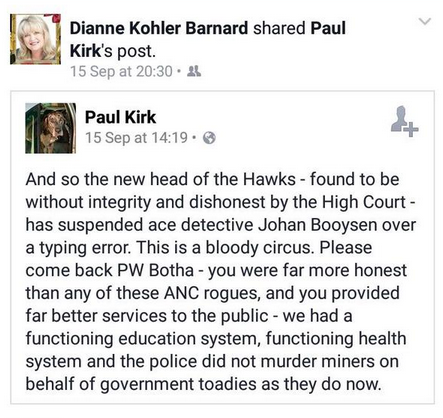