Drug crime up since SANAB closed down - DA

Drug related crime up 87% since specialised unit was shut down

I will, tomorrow, write to the chairperson of Parliament's police committee to urge that the committee debates the reconstitution of specialised units, after statistics released last week showed shocking increases in crimes in areas effected by the closure of specialist units - and particularly given the 12% year-on-year increase in sexual offences, and 87% increase in drug related crime since the shutting down of the South African Narcotics Bureau (SANAB).

Though the minister has hinted at a return of the Family Violence, Child Protection and Sexual Offences (FCS) units, it is essential that he also recognises and acts on the drug crisis in South Africa - which has certainly been fuelled by the closure of the Narcotics Bureau. The year the unit was disbanded, the SAPS reported 62 689 drug related crimes (2003/2004), but the figure now stands at 117 172. While drug related crime was on a steady incline prior to the closure of this unit, the effects of the announcement of the Bureau's closure (2003) and its actual closure (2004) are clearly visible. 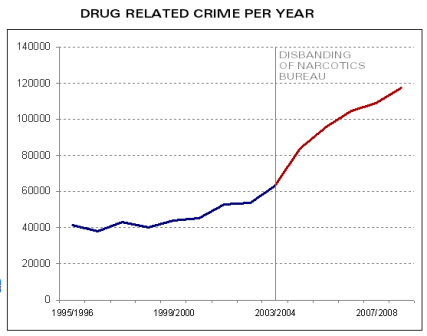 DA calls for reinstatement of SANAB

Ramaphosa’s failures are his successes

Why SA needs NHI, in Nicholas Crisp’s own words

Are electric taxis the future of air travel?