Display of the Apartheid Flag by AfriForum

JOHANNESBURG: On 21 August 2019, the Equality Court ruled that gratuitous displays of the Apartheid-era national flag constitutes hate speech, harassment and unfair discrimination in terms of the Promotion of Equality and Prevention of Unfair Discrimination Act (‘The Equality Act’). The application was brought by the Nelson Mandela Foundation and opposed by AfriForum. 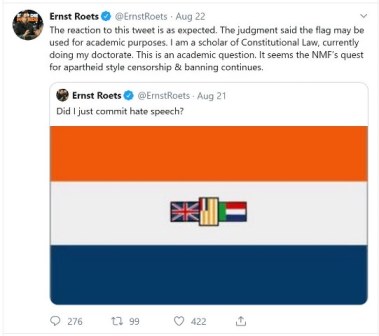 On the same day as the ruling, a representative of AfriForum, Ernst Roets, gratuitously and publicly displayed the flag on Twitter under the pretext of academic debate. The Equality Act does not protect academic displays made in bad faith. The Foundation is of the view that AfriForum's representative's actions were in bad faith and in contempt of court. It was also disrespectful to the Deputy Judge President of the High Court.

The Foundation has reached out on many occasions, publicly and privately, to  collaborate with AfriForum and work together towards healing the wounds of the past and building the country described in our Constitution. These efforts have been rejected by AfriForum.

The Nelson  Mandela Foundation will now be proceeding with an urgent application in the High Court to declare Ernst Roets in contempt of court.

NMF vs the old SA flag: The High Court judgment