The civil rights organisation AfriForum released its latest report on farm attacks and murders at a press conference today. According to the report, 2020 saw an increase in farm murders despite the fact that crime in South Africa decreased in the same year.

AfriForum also announced its strategy to curb farm attacks and launched the Safeguard a Farm campaign in cooperation with Saai. The campaign aims to provide farmers with the necessary training to enable them to take their safety into their own hands.

“Although farmers are increasingly more vigilant, it is AfriForum’s aim to make them and their families more defensible against farm attacks. AfriForum will continue to drive projects, actions and campaigns to improve the safety of our farmers and support them where we can,” says Marnus Kamfer, AfriForum’s Legal and Risk Manager.

“Government cannot continue to ignore the impact of farm attacks and murders on its victims and their communities,” Muller concludes.

Text of the report:

A report by Andrea Muller

South Africa witnessed a general decrease in crimes from 1 January 2020 to 31 December 2020, the scope of this report. This decrease can be attributed mainly to the multiple lockdowns, and especially to the hard lockdown between 27 March and 1 May 2020. However, farm murders – which are still not classified or treated as priority crimes – unfortunately did not follow the same pattern: There was an increase in farm murders in 2020 compared to 2019.

AfriForum Research recorded 63 farm murders for 2020, whereas the organisation recorded 45 farm murders for 2019. These include all incidents that fit the official definition of the SAPS’s National Rural Safety Strategy (see below), and which could be confirmed.

Despite numerous protests in 2020 – most notably the Senekal protest – government still denies that this crime phenomenon should be prioritised. Minister of Police, Bheki Cele, paid a few visits to farms in 2020 to condemn these violent attacks and murders, and to offer his condolences to families of the victims. That said, however, no further steps were taken to prioritise or prevent future farm attacks and murders.

The definition used by AfriForum Research for this report is the definition published in the National Rural Safety Strategy:

Acts of violence against person/s of farms and smallholdings refer to acts aimed at person/s residing on, working on, or visiting farms and smallholdings, whether with the intent to murder, rape, rob, or inflict bodily harm. In addition, all acts of violence against the infrastructure and property in the rural community aimed at disrupting legal farming activities as a commercial concern, whether the motive/s are related to ideology, land disputes, land issues, revenge, grievances, racist concerns, or intimidation are included.

The definition excludes cases that relate to domestic violence or alcohol abuse, or cases that resulted from commonplace social interaction between people or any labour disputes.

Because of the importance of the matter, data collection and the integrity thereof should be above reproach. The data used in this report was thoroughly verified, whereas all information in the report was collected from reliable media outlets, different security networks, social media and – in some cases – directly from the families affected.

It is important to note that the farm murder statistics used in this report can be considered conservative and are subject to change. This is because information can become available after the incident, or because of insufficient or conflicting information regarding a case.

This report will focus mainly on farm murders that were committed in 2020.

The decrease can be attributed to the lockdown, which restricted people's movements and resulted in more police patrols. However, the attacks were not less violent. Many attacks were extremely violent in nature, and victims were tortured and left traumatised. In one incident, a North West couple was left with burns, broken ribs and multiple head wounds after three attackers ambushed them on their farm.

The prevalence of farm attacks is shown per month in figure 1. 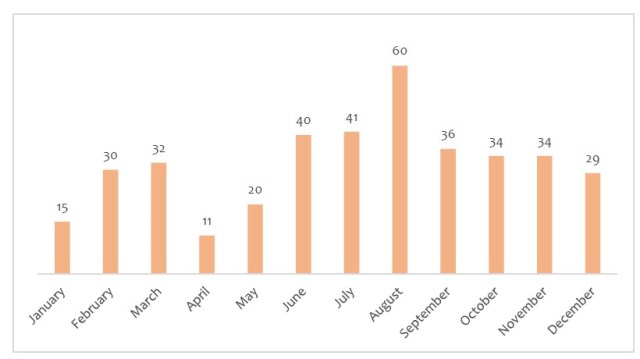 There were 63 confirmed farm murders during 2020, which is a sharp increase from 45 murders in 2019. It should be noted that farm murders did not decrease during the lockdown, as opposed to farm attacks and other crimes, which saw a decrease.

January was the only month in which no farm murders were recorded, while most murders occurred in December.

Table 1: Percentage of murders per province 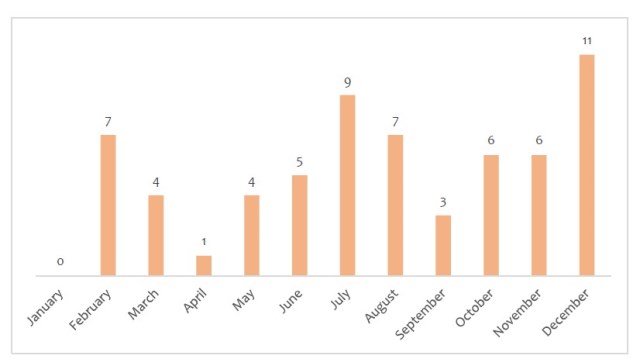 Most of the incidents were committed on Mondays, followed closely by Saturdays. Wednesdays saw the lowest number of attacks. The reason why attackers chose a particular day to attack is unknown, as these can be influenced by various factors. 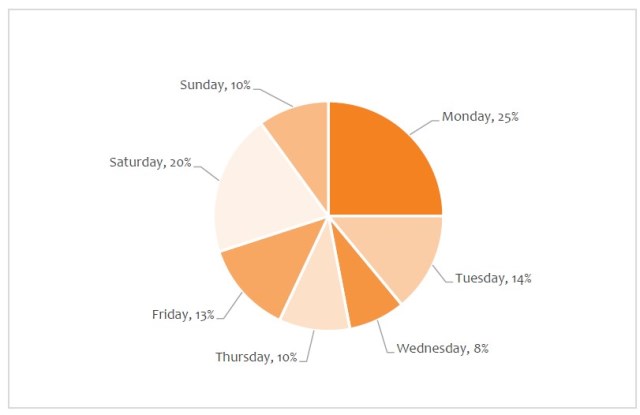 Most farm murders were committed between 19:00 and 03:00. 1 This is when most victims are vulnerable – most likely asleep – and are caught off guard. Attackers often use this surprise element to their advantage, because victims are unprepared and have little opportunity to defend themselves.

A total of 111 victims were involved in farm attacks during which at least one victim was killed. Sixty-three people in total were murdered in these attacks.

Almost a quarter of murder victims were between 60 and 69 years old, whereas the majority of victims (63%) are older than 50 years.2 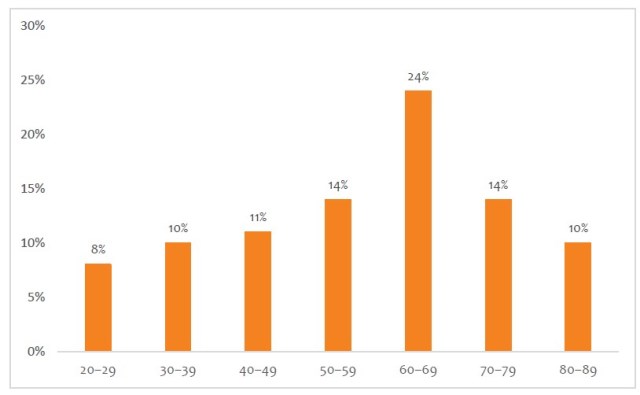 At least one form of torture was inflicted on victims in 20% of the incidents. Forms of torture include burning, beating or stabbing the victim to death. In many incidents, the perpetrators displayed the body of the murder victim.

Weapons vary from firearms and knives to blunt objects, whereas some victims were also beaten and/or kicked to death. Attackers often use any available object to kill their victims.

Attackers also use household items to tie victims up, such as phone chargers, shoelaces or any wires or cables available to them.

In 25% of incidents, vehicles were stolen. The attackers often use the vehicle only to flee the scene, and the vehicles are later found abandoned.

Cell phones and firearms (pistols, shotguns and rifles) were the second-most stolen objects. In four incidents, nothing was stolen from the scene.

On 26 January 2021 AfriForum attended a virtual rural safety workshop during which the organisation presented ten steps to combat farm murders. Furthermore, with more than 150 active AfriForum neighbourhood and farm watches and the cooperation of different security structures, there are many success stories that were made possible by proactive steps to keep farmers and communities safe.

AfriForum aims to create a safe environment for farmers and communities, which can be achieved by providing the community with the proper resources, training and effective countermeasures.

Zakiyya Ahmedjan was killed in her home on 4 July 2020. The attackers dragged her to the bathroom and slit her throat. She was pregnant. Her other two children were in the house when she was killed.

In two separate incidents, the victims’ bodies were put on display – one was tied to a tree and the other to a pole.

Government cannot keep denying the severity of farm attacks and murders, and their impact on victims and communities.

When we prioritise and create a separate crime category for farm murders and attacks, more detailed research can be compiled on the crimes—the motive for the crime, how targets are selected and the modi operandi.3

The first step to solving a problem is to acknowledge that it exists. The next step is to understand the problem, plan a solution and then to act. Communities have followed all these steps to ensure their own safety, but limited resources and a lack of information – especially crime intelligence-related information – is a limiting factor. It is time for government to step up and serve communities so that these atrocities can come to an end.

[1] The time for 40% of incidents remains unknown.

[2]  The age of the murder victim was unknown in six incidents.

SA’s overburdened taxpayers hit again: how the budget plays out in your personal finances