Statistics show that expectations of e-tolls not materialising

Expectations and projections about the income that would be generated by e-tolls, is not materialising and according to statistics the FF Plus obtained following a parliamentary question the opposite seems to be happening, Adv. Anton Alberts, the FF Plus’ parliamentary spokesperson on Transport says.

According to Adv. Alberts, a table about the real income and projections of income in the first seven months after e-tolls had been implemented in December 2013 shows that income had grown month on month following which it started a sharp decline in June 2014.

In contrast with the real income, the projections show excessive expectations which from March this year have been two-thirds higher than the real income. No figures were added to the table and the FF Plus has asked that it be provided.

From further questions it appears that the system’s total operating costs are more than R66 million a month and that the monthly registration of e-toll users is also busy sharply declining. In April this year, only 20 104 tags were registered as opposed to 71 751 in April last year and 356 766 in December 2013.

To a question as to how many tags are being de-registered every month, a non-committal reply was given without providing any figures. The FF Plus also asked for the real figures to be provided.

Adv. Alberts says the figures which were provided create a clear picture of a system which is busy collapsing and has hardly any legitimacy any more.

“It is clear that the expectations which had been created with the e-tolls were excessively high. But as to how big the system’s financial crisis really is, will only be seen when the questions are answered in full,” Adv. Alberts says.

Text of the reply:

Adv A de W Alberts (FF Plus) to ask the Minister of  Transport:

(1) What is the revenue that was generated in each month by the e-tolling system since the day it was switched on until the latest specified date for which information is available;

(2) what is the monthly revenue required to run the e-tolling system at a profit;

(3) what are the respective monthly expenses that have to be paid by the monthly revenue from the day the e-tolling system was switched on untilthe latest specified date for which information is available;

(4) how many e-tags were registered in each month since the day the system was switched on until the latest specified date for which information is available;

The following graphs indicate  the  actual  cash  received  (1) as well  as  the  expected  I forecasted revenue (2) per month. 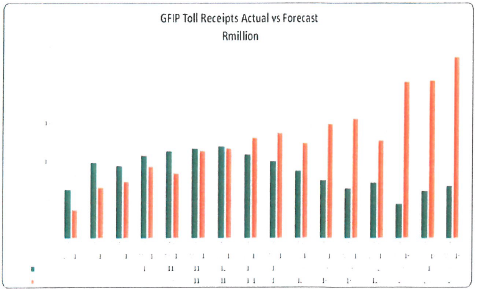 (1) As the honourable member is aware toll roads funded by SANRAL through borrowings on the capital markets are  not profit driven,  but cost  recovery driven.   Therefore, the toll is calculated at the level where all associated costs can be covered over the approximate project of 30 years.  For toll projects, the costs that must  be recovered are the capital repayment of the  initial construction works  and all other capital works during the project period, the servicing of debt, routine maintenance costs, periodic maintenance costs (every 8 to  12 years), provision of lighting and maintenance, toll operations and toll system maintenance and Intelligent Transport Systems and Incident Management Systems towing vehicles, medical assistance, incident management vehicles.

(3) how many e-tags were registered in each month since the day the system was switched on until the latest specified date for which information is available;

As the honourable member will note from the figures, notwithstanding the unfortunate pronouncements and continuous encouragement by the detractors of the project. law abiding citizens have continued to register and pay - they do the right thing. For that we thank them.

COSATU threatening to bring SA to its knees - Anton Alberts