Mining down by 6,1%, driven largely by fall in production of platinum group metals, coal and iron ore

GDP contracts by 0,6% in the third quarter

After rebounding by a revised 3,2%1 in the second quarter of 2019, activity in the South African economy slipped slightly in the third quarter. Mining, manufacturing and transport were the biggest drags on growth in gross domestic product (GDP). 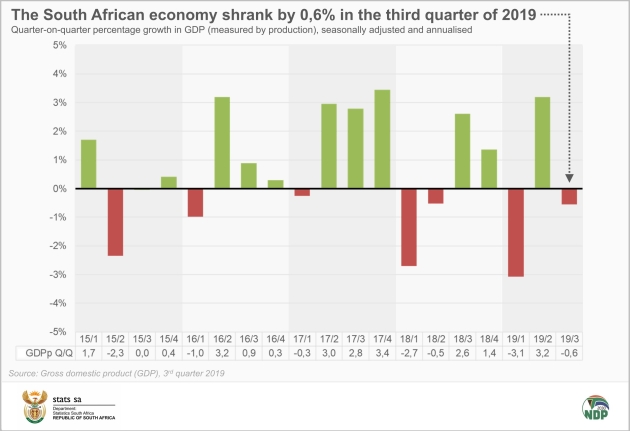 Mining was down by 6,1%, driven largely by a fall in the production of platinum group metals, coal and iron ore. Gold saw some positive movement in the third quarter, according to the Mining: Production and sales release for September 2019 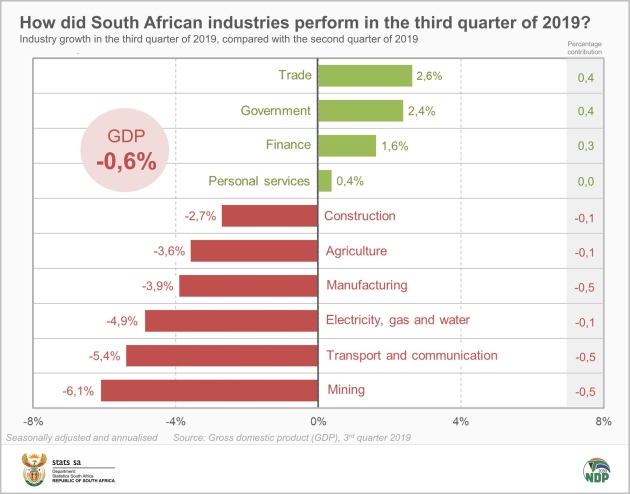 Manufacturing fell by 3,9%, but being a bigger industry than mining, its contribution to total GDP growth was just as large (-0,5 of a percentage point in both cases). The contraction was mainly due to decreases in the manufacturing of basic iron, steel, and machinery products, as well as products related to the petroleum, chemicals and plastics division. Positive gains were reported in the third quarter for the food & beverages and transport manufacturing divisions.3

The transport, storage and communication industry also found itself on the back foot, falling by 5,4%. This is the biggest quarter-on-quarter fall for the industry since 1993. A slowdown in activity related to freight and passenger transport dampened growth in the third quarter.

The construction industry failed to pull itself out of recession, registering its 5th consecutive quarter of negative growth. Decreases were reported for activities related to residential and non-residential buildings, as well as construction works. The industry contributed R106 billion to total value added in the third quarter of 2019, lower than the R110 billion high recorded in the fourth quarter of 2016 (constant 2010 prices, annualised).

Construction’s poor performance is mirrored in other data. Stats SA recently reported that public-sector investment in fixed assets such as buildings, vehicles, land and equipment fell by 8,2% between 2017 and 2018 (current prices), while spending on new construction works dropped by 11,3% over the same period.4

The positive contributors to GDP growth in the third quarter were trade, government and finance. Positive growth in wholesale, motor trade and accommodation lifted the trade industry by 2,6%. A rise in civil service employment in provincial government and higher education institutions pushed general government services up by 2,4%.

Key facts from the GDP release for the third quarter of 2019:

Real GDP in the third quarter was down 0,6% quarter-on-quarter (seasonally adjusted and annualised).

Unadjusted real GDP growth in the third quarter was 0,1% year-on-year.

Unadjusted real GDP growth for the first nine months of the year was 0,3% year-on-year.

Expenditure on GDP in the third quarter fell by 0,3% quarter-on-quarter (seasonally adjusted and annualised), largely the result of a drawdown in inventories.

1 Unless otherwise indicated, all growth rates are quarter-on-quarter, seasonally adjusted and annualised, and in real (volume) terms.

2 Stats SA, Mining: Production and sales, September 2019. Table B (download here). Note that the growth rates appearing in this release are not annualised.

3 Stats SA, Manufacturing: Production and sales, September 2019, Table B (download here). Note that the growth rates appearing in this release are not annualised.

Similar articles are available on the Stats SA website and can be accessed here.

For a monthly overview of economic indicators and infographics, catch the latest edition of the Stats Biz newsletter here.