The development of the South African statistical system

The development of the official statistical system in South Africa has gone through four main phases:

1. Pre-1910. Records of various kinds have been kept in the Cape since the seventeenth century, but there was a clear extension in the middle of the 19th century and the first census was held in 1865. By the end of the nineteenth century, statistical systems and censuses were in place in the Orange Free State. The laggard was the South African Republic, later the Transvaal, which produced a census in 1890, but of such poor quality as to be useless. In 1904, censuses were held in all four provinces.

2. 1910 – 1948. Here South Africa sought to emulate Dominion standards. But the quality of the work was lower, and collecting information by race imposed a special burden.  Information about Black/Africans was particularly exiguous.

3. 1948 – 1994. Two features of this period stand out. The first was an obsession with racial classification, and later with residence in and outside the homelands. The second was increasing isolation, with a growing gap between international best practice in middle-income countries and the South African statistical system.

4. Post-1994. Re-entry into international statistical circles resulted in the introduction of new statistical measurement. South Africa signed up to the Selective Data Dissemination Standard which committed the country both to a set of measurements and standards for carrying them out.  The constraint has been the human capital available to the government. Some measurement has got off to a shaky start, and there have been serious errors on occasion. Accurate measurement of income, for instance, has been an enduring problem, making estimates of poverty and inequality uncertain. In some respects, we are back to the 1910 – 1948 period, with international rather than imperial agencies setting standards and quality remaining a problem. Racial classification has left its mark in a ‘non-racial’ society.

Estimates of population growth since 1990

There are several estimates of the rate of growth between 1990 and 2015. They are:

1. Estimates from the SPECTRUM model. This has been developed with assistance from USAID, UNICEF, UNAIDS and the World Health Organization.

2. Estimates from the United Nations World Population Projection (the 2015 round)

4. Estimates by the World Bank

7. The Thembisa version 2.5 model, which grew out of the Actuarial Society’s work on modelling the impact of AIDS on the population.

Figures 1 and 2 graph the international and domestic estimates respectively. 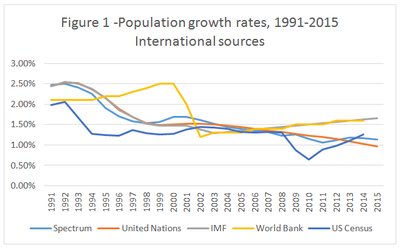 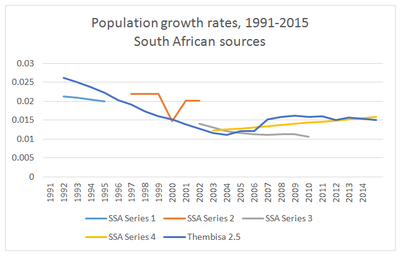 The figures show the level of uncertainty about the rate of population growth over the past quarter century. Figure 1 shows that the SPECTRUM estimates are closely aligned to the UN Population Projection by design. The World Bank estimates are off the wall between for a decade from 1993, but then coincide with the IMF estimates and show a rising rate of population growth from 2003, compared with a falling rate of growth estimated by the UN Population Projections. The US Bureau of the Census estimates are below all the others up to 2003, and they are approximately static between 1997 and 2008. Then follows a dip not present in any other estimates, followed by a sharper rise than other international estimates.

Figure 2 shows Statistics South Africa struggling to come to terms with the data. Series 2 estimated from data from 1996 to 2002 appears the most inaccurate, and Series 3 (from the 2010 report) and Series 4 (from the 2016 report) go in contrary directions, the first indicating a decline in the rate of population growth and the second an increase.

Note: The United Nations estimates and projections run from mid-year to mid-year, whereas the Thembisa estimates are for calendar years. Also, Thembisa births from the beginning of 2011 to the end of 2015 cannot be read off their published spreadsheet, so they are entered as five times the 2016 estimate. The Thembisa estimate of the increase in population in 2016 is multiplied by five to get a rough estimate for 2016-2020

It is an indictment of the quality of our primary statistical information that estimates of population growth vary so widely. The differences in estimates arise from different professional judgments about how to fill in gaps in the available information and how to adjust the components of population estimates from the raw data: the age structure of the population, fertility, mortality and international migration.

A final word. The demographic dividend is a boost to growth, arising from a change in the age distribution of a population. As the demographic transition proceeds, the ratio of people of working age to the total population first rises, then falls. The ratio rises because falling fertility decreases the number of children born, while the population of working age (already born) remains what it would have been without the fertility decline.  For a while, the drop in the number of children outweighs the increase of the old people. Then fertility stabilises, and the ratio starts to fall, because rising life expectancy means that the number of the old rises. The UN median population projection indicates that the proportion of people in the working age range in South Africa will peak in 2040.

With full employment, an increasing share of the population in the working age range should boost economic growth. Rising unemployment, however, means that the demographic change fails to translate into economic advantage. The early stage of our demographic dividend has largely been wasted and, unless we can find our way to considerably higher employment growth, the later stage will also yield little.

[1] Evidence from the 2011 Census and the 2016 Community Survey suggests that both estimates of net immigration are too high, as forthcoming briefs on migration will indicate