Durban - Embattled KwaZulu-Natal realtor Penny Sparrow, at the centre of a race-row that has gripped the country, has said that she was merely "stating the facts".

She had taken to Facebook and described black beachgoers as "monkeys", in an apparent reaction to litter left behind after New Year’s celebrations.

There has been mass reaction to her statement across social media platforms, as well as from political quarters.

Speaking to News24, she revealed what had driven her to compare black revellers to monkeys. 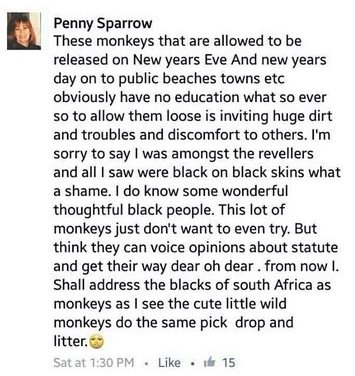 "Every year it is the same story; it’s their [black people] day and we don’t go in the beach, we don’t interfere, we let it be. We all know it and there is nothing wrong. We stay out of the way and stay at home," she said.

"I am sorry that it has taken such a viral turn, but it was just a statement of how it was. I made the mistake of comparing them [black people] with monkeys. Monkeys are cute and they’re naughty, but they [black people] don’t see it that way, but I do because I love animals,” she said.

"I wasn’t being nasty or rude or horrible, but it’s just that they [black people] make a mess. It is just how they are.”

Sparrow remained largely unrepentant, saying that she had just "said it how she felt it".

"I put an apology up to say I didn’t mean it personally. That day on that beach it was all black people, I’m sorry to say it, but it is a fact of life. I said it as I felt it and I know it was wrong to do it on a public thing [Facebook] like that. I don’t know how it got out and we were all saying it," Sparrow added.

"That is not me. I know it is like that [the packed beaches], why would I say that? Any person, a white skinned person or an Indian that goes down to the beach on that day doesn’t know the country, I know it very well."

'I work with blacks and I am kind to them'

Later she conceded that she stood by the facts of her post, when it was read back to her.

"I realise now that they [blacks] obviously hate that. I don’t recall putting it like that. I just remember saying that there were so many black people like monkeys dropping things everywhere. …making love in the bushes is, you know, fine if that is what they want to do, but the dirt was just terrible," she said.

"I work with blacks and I am kind to them and they have accepted me. I have worked with an Indian girl who kept my job open while I was in hospital. She’s a wonderful girl and she’s an Indian. Blacks can also be wonderful and I don’t hate the black people, it is just a fact that it was so filthy and dirty this year and that is my only point," she reiterated.

Sparrow said that her two phones had been crippled by messages and hate mail, after it emerged that she had sought the help of the police as she feared for her life.

She said that she was born in East Africa and "raised by blacks, that's just how it was" and hence had no reason to have anything against a black person.

EWC enshrines theft on a national basis; it can’t be allowed – Bernard Tuffin