The FF Plus strongly condemns the incident in which an EFF Member of Parliament, Marshall Dlamini, assaulted a policeman in the Parliamentary buildings after the SONA last week Thursday.

Police members are deployed at Parliament by the senior management of the Police Service to offer protection and the assault on the policeman, warrant officer Johan Carstens, only goes to show that the EFF is undermining and challenging the authority of the Police.

The FF Plus will keep a close eye on the case to ensure that Dlamini is indeed criminally prosecuted. The party will also lodge an official complaint against Dlamini with Parliament's Ethics Committee because his behaviour is absolutely unacceptable.

The EFF's allegation that there was a security threat to its leader, Julius Malema, and that the attack was part of a conspiracy against him is nothing but a fabrication. Malema has a record of crying wolf and making false allegations regarding conspiracies against his life and even explosions at his home.

For example, in 2011 the then Minister of Police, Nathi Mthethwa, responded to a parliamentary question by the FF Plus leader (Dr Pieter Groenewald) and denied that there had been any bomb threats made against Malema who was the ANC Youth Leader at the time (please see the relevant media report dated 15 September 2011 attached herewith).

Thus, it is nothing new for the EFF and Malema to pretend that his safety is in jeopardy in an attempt to get attention and to use it as an excuse for its members' misconduct, as is the case with the latest incident of assault.

In the runup to the general elections that will be held in May this year, the EFF must rather try to explain to its supporters how it will execute its unrealistic promises instead of trying to get attention with such inappropriate behaviour. 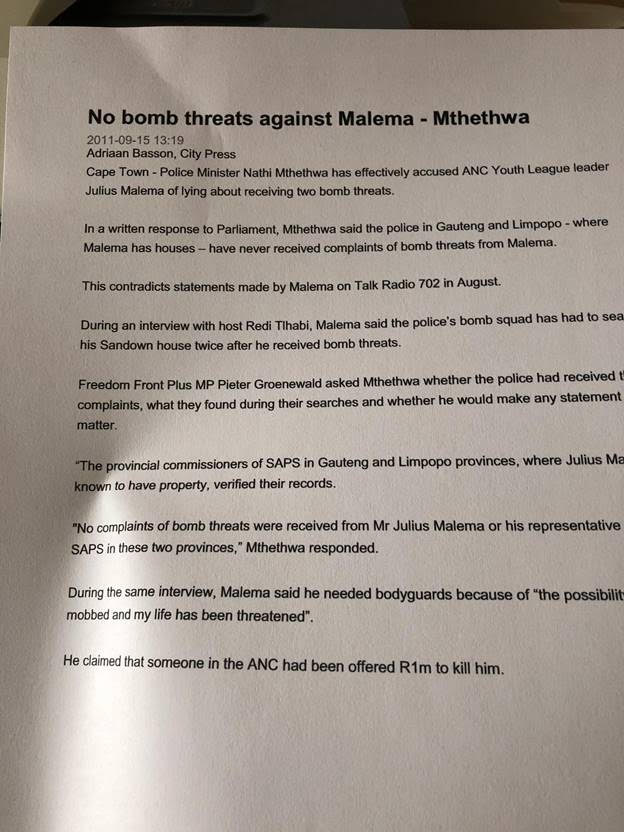 Gordhan vs Malema: Application for case to be heard in High Court

ANC looking for a way out on land issue - Malema