The DA will write to the Minister of Defence and Military Veterans, Nosiviwe Mapisa-Nqakula, to request that she investigate an allegation of hate speech and race-based incitement of violence involving Major Mohlala of the South African Defence Force’s (SANDF) Signal Formation at the Wonderboom-Military Base in Pretoria.

Major Mohlala reacted to a photo on social media of a badly beaten 80-year-old man saying that the attackers  so that the last people he would ever see, were the killers and he could go to his grave with the nightmare.”

Further Major Mohlala stated that “Apartheid is in him. All of these old white people think we are stupid when they say they were opposed to apartheid. We will not forget what they have done. Now it is the white people’s turn.”

There is no justification for such hateful commentary by any South African. Given the position held by Major Mohlala in the SANDF, these remarks are simply unacceptable.

Apparently, Major Mohlala has only received a warning of future disciplinary action. This is simply not enough given the seriousness of his breach of non-racialism and respect for human dignity.

The DA will also report the matter to the South African Human Rights Commission (SAHRC) for further investigation.

Major Mohlala has the privilege of serving in our armed forces. His mandate is to protect our nation, not to add to the high levels of crime or promoting violence and racial hatred.

The Minister must urgently address this matter with the seriousness it deserves. 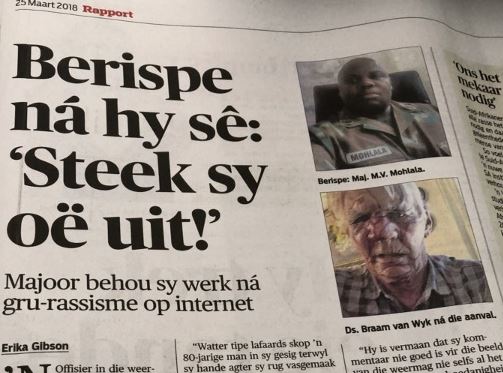 ‘Colonel’ Molefe’s appointment letter must be made public – Kobus Marais