BLF leader said, “For those claiming legacy of holocaust is ONLY negative think about lampshades and Jewish soap.”

The SAJBD is appalled by the crassly offensive, demeaning and hurtful comment made this morning by Black First Land First (BLF) leader Andile Mngxitama. In a tweet, Mngxitama wrote, “For those claiming the legacy of the holocaust is ONLY negative think about the lampshades and Jewish soap.”

With this ugly, jeering remark, Mngxitama has portrayed not just the deliberate murder of Jewish people but even the supposed reduction of their remains to everyday objects as something to be treated as a joke. It is deeply distressing that anyone could so casually and publicly dehumanise an entire people in this way. How much more outrageous it is when emanating from a public figure who heads up a political voice.

Mngxitama scoffing reference to how Jews became victims of one of history’s most appalling crimes displays outright contempt for basic humanitarian, non-racial values, together with a complete lack of compassion for human suffering. His overtly hateful tweet is a flagrant attack on the fundamental rights to dignity and equality of Jewish South Africans and should be strongly condemned by all in our country. Civilised society, and certainly South Africa with its stained history of human rights abuses, has no place for those who condone the merciless massacre of millions of innocent people in the most cruel way.

The SAJBD is currently reviewing its options in terms of what action to take against Mngxitama. 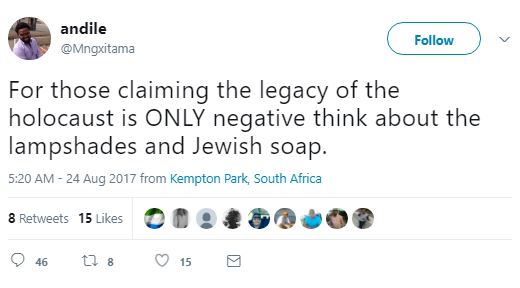 We are not thugs, we are revolutionaries – Mngxitama

The Daily Insider: The best time to buy is when Mr Market panics

Neutral on commodities in 2022, here’s why – mining guru Peter Major

JSE market review: China will provide tailwind for the JSE in 2022