Former president says he has only met the DA leader once, in March 2015, when he paid a courtesy visit

There is no truth in the rumours that I am “tutoring Mmusi Maimane”.  He has never been to my home and never sought my advice "on speeches and leadership and acting presidential”.

I only met him once, at my office, in March 2015 when he paid me a courtesy visit.

It is also untrue that I at any stage said “that black people are more racist than white people”. The report which appeared to this effect was untrue and the FW de Klerk Foundation is taking steps to correct this. 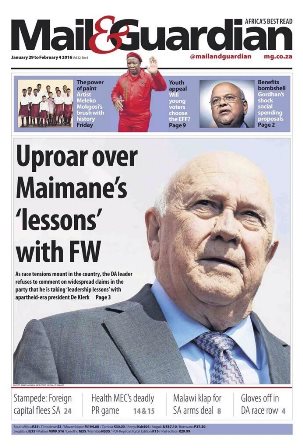 Life is better in South Africa

The fury of a Sisulu scorned

It's not the ANC that is worrying me right now

The easy money has been made, it’s time for investors to grit their teeth – Magnus Heystek

"The easy money has been made, it’s time for investors to grit their teeth – Magnus Heystek" - BizNews