Following the allegations of racial segregation on social and mainstream media that transpired at the Laerskool Schweizer-Reneke yesterday the DA’s Premier Candidate for the North-West, accompanied by the DA Youth Leader Luyolo Mphithi and DA North West Chairperson, Carin Visser visited the school to fully interrogate what actually transpired in the classroom with the principal, Mr Alwyn Henning.

Following the meeting with the school principal it transpired that the class teacher, Ms Elana Barkhuizen, was suspended with immediate effect pending an investigation. The DA welcomes this as well as the investigation that will follow.

The DA strongly opposes segregation of young children on any grounds. As a country we need to recommit to Nelson Mandela's ideals of reconciliation and the rejection of racism.

We will only build One South Africa for All, when we are all seated around the same table and when we are willing to listen to each other.

The DA regrets that the situation escalated to the extent that these young children had to be evacuated following the mobilisation by other political parties. Many innocent children will be left traumatised by today’s events and we call on the school to offer counselling to all children who were affected by this incident.

The DA also calls on all stakeholders that we refrain from projecting fears and prejudices onto children that will compromise a future for a better, more united and more equal society.

The wounds of the past are still raw, therefore we need to be deliberate on our process of healing. South Africa belongs to all who live here. We will only be able to succeed if South Africans from all walks of life are united.

South Africans must vigilantly guard against political populist rhetoric, especially in this election year, that seeks to divide people on the basis of race, which will only serve the agendas of far-right and far-left political parties.

The DA remains the only party that seeks to build One South Africa for All, a prosperous and equal society built on shared values.

DA statement from day before:

The DA strongly condemns the alleged separation of black and white learners in a Grade R classroom at Laerskool Schweizer-Reneke in North West.

It is outrageous that a classroom in 2019 can be racially segregated, which only serves to teach young children from day one to see each other as different and separate. This is unconscionable.

It is for this reason, I will travel to Laerskool Schweizer-Reneke tomorrow to demand answers as to how young learners were allegedly exposed to this situation. We hope that the school staff is ready and willing to address this issue immediately and to make a commitment to change outdated attitudes toward integration.

Details are as follows:

No purpose can be served by separating black and white learners, this is a shocking replication of apartheid policies.

The DA is dedicated to bringing together all citizens to build one South Africa for all, and we will continue fight tirelessly for the Constitutional rights of every learner in our country. 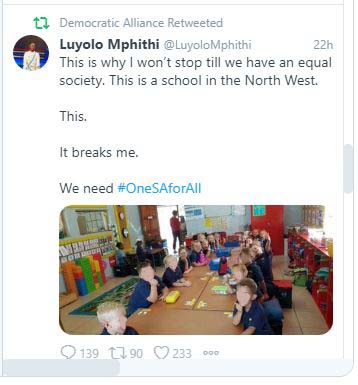