Ombudsman ruling reveals a lacuna in The Press Code

The DA does not agree with the Ombudsman's finding that Mde and Brown were at the ANC celebrations in their personal capacity. Brown admitted on Twitter that Independent Newspapers had paid for their flights to attend the ANC's rally, which would indicate that they were in fact at the event in a professional capacity (see below).

The Ombudsman concluded that his office currently has no jurisdiction to rule on the conduct of Mde and Brown because the Code does not currently cover conduct not resulting in the "publication of journalistic content".

The DA accepts this interpretation of the Press Code, but believes that the ruling has revealed a lacuna in the Code itself that needs to be reviewed.

This is an opportunity for the South African Press Council to assess whether the Press Code's ambit is currently broad enough to ensure the spirit of independence and standards captured in its preamble is practiced in the journalism industry:

"As journalists, we commit ourselves to the highest standards of excellence, to maintain credibility and keep the trust of our readers. This means always striving for truth, avoiding unnecessary harm, reflecting a multiplicity of voices in our coverage of events, showing a special concern for children and other vulnerable groups, and acting independently."

The DA maintains that the actions of Brown and Mde do not meet the highest standards of excellence, especially given the seniority of positions they hold at Independent newspapers and the public perception created by their actions.

Their attendance of the ANC birthday celebrations must also be seen against the backdrop of the Independent Group's axing of independently-minded journalists and the unnecessary apology recently issued to the President.

While the Ombudsman may not currently have the mandate to rule on this matter, it does not mean that the conduct in question is any less harmful to public trust and belief in the credibility of these editors and Independent newspapers. 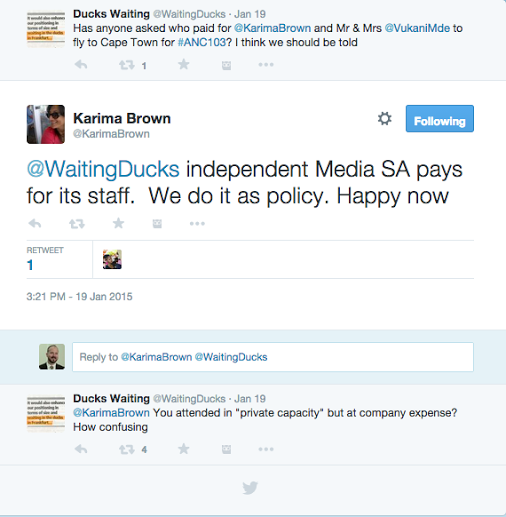 Questions raised over why top Indy editors were in ANC colours

Crypto assets a step closer to regulation in SA