Only DA can bring change that builds One KZN - Zwakele Mncwango

Only the DA can bring change that builds One KZN

The following speech was delivered by DA KZN Premier Candidate Zwakele Mncwangoat the party’s launch of DA Team One KZN.

Some 56-57-years ago the father of democratic South Africa was captured at this very site. Arrested and persecuted for standing up for what was right. Nelson Mandela and many others knew that our country “belongs to all who live in it, united in our diversity”, as our Constitution so boldly states.

We have indeed come a long way as a nation, with our first democratic election having taken place 25 years ago, opening doors to new opportunities and a gateway to new challenges. Challenges we have to confront, address and conquer together.

The build-up to the 1994 election led to hope and euphoria. People from all walks of life wanted a taste of this freedom. There were high expectations, and rightfully so. 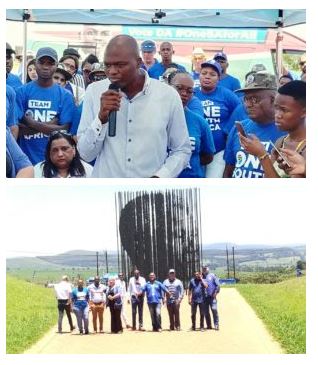 Today South Africa faces a new fight, a fight for fair access to real, long-term jobs, a fight to end corruption, a fight to make sure that our people are kept safe and secure by an honest and professional police service, a fight for the speedy delivery of quality services. Our fight is to build One South Africa for All.

It was shameful that the party that governs KwaZulu-Natal, the failing ANC, proudly entered the homes of the Province’s most poor and oppressed to campaign ahead of their glitz and glam anniversary celebration. ANC deputy president, David Mabuza, by his own admission, stated that his wayward party has failed the people of KZN, in particular when it comes to housing.

This is evidence that the failing ANC is the party of empty promises, which are repeated with each election cycle. Once the dust of the election cycle has settled the people will be left with yellow pamphlets and t-shirts. The failing ANC has been given too many second chances, it’s now time for real change led by the DA that speeds up the delivery of services.

As a build-up to ANC’s celebrations, millions were spent on useless parties and bashes all around the province. In fact, the ANC didn’t even want us to hold such an important event like today's at this prestigious venue because they still think they hold Mandela’s values.

They are fooling only themselves. DD Mabuza, MEC Nomusa Dube-Ncube, Mike Mabuyakhulu, Sihle Zikhalala represent nothing like Mandela. It is for this reason that the people of KwaZulu-Natal will discard the fialing ANC this year, they will say no to a government hell-bent on prioritizing the few connected ones at the expense of the people.

The people will vote for real change. Not the ANC, which is the same broken bus with only a new driver, which will not take KZN and country in the right direction.

We will fight for a free and fair society for all; where the colour of your skin will not determine your progress in life.

Our borders and Crime

Criminals are in charge in our province with South African Police Services Officers working in fear. If our law enforcement institutions succumb to these criminals where does it leave us ordinary South Africans?

We need to beef up our police service to ensure that those that captured for criminal acts are sentenced accordingly. That we are able to roam our streets freely and access our public spaces confidently.

This cannot be achieved if the status quo remains, but will only get worse. Change is what we need today more than ever. We need an honest and professional police service.

On Jobs and the Economy

Our economy is bleak and faces a number of challenges and we need to begin the discussion around it.

Some of the pressing concerns are:

Employment corruption; here we speak to

The challenge herein is that law enforcement authorities are made aware of such cases late. People are desperate out there and are not protected or shielded against these elements.

Government needs to encourage entrepreneurship, not just as rhetoric, but as a reality. We need to speak small business aspirations by:

Providing the requisite skills development and

Millions of people are unemployed and have no access to employment opportunities. This can be rectified by:

Ensuring that the cost for finding a job is not high. Currently it cost too much to look for a job and it discourages a number of job seekers.

We have an interesting road ahead. The DA once again has the task of reminding fellow South Africans and residents of KZN that clean and productive government is possible.

Only the DA is ready for the task building an economy that opens fair access to real, long-term jobs. We need jobs in every home.

I have been crisscrossing the province for some time now and have seen some great sights. I have also seen communities neglected and filled with empty promises.

With all that being said, KZN has decided that we need to speak to as many of our communities as possible. As I introduce our Campaign Team for KZN, I must say that this does not pull away from work from our public representatives who have a task to change the lives of the people in the communities they are part of. My team is as follows:

DA Team One KZN, together with my provincial leadership which includes the provincial chairperson Francois Rodgers and his deputies Craig Miller and Hlengiwe Biyela, are leading the fight to the ballot box. They represent the future we want to build and they are armed with the thousands of volunteers and members spreading the DA’s message. This is the team that will now crisscross this province with me as bring our message of change to the people of KZN.

The time is now to stand up and force such change.

I and this team commit to the people of KZN that we will make a real better life a reality and build One South Africa for All.