Prasa chief engineer registered with Engineering Council, but not with a degree

A preliminary investigation of the FF Plus has found that Prasa chief engineer, Dr. Daniel Mtimkulu, is indeed registered with the Engineering Council of South Africa (ECSA), but only as an engineering technologist, Adv. Anton Alberts, the FF Plus’ parliamentary spokesperson on Transport says.

The information on Mtimkulu’s registration can be found on Ecsa’s website (www.ecsa.co.za). According to the site, Daniel Qhubekani Mtimkulu, with registration number 200970014, has been registered since 22 January 2009 as a civil professional engineering technologist. 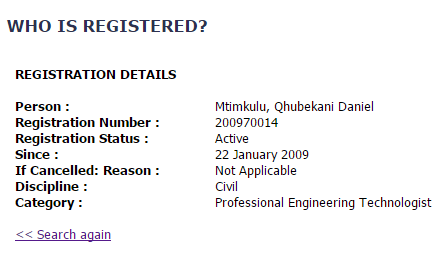 Adv. Alberts says the FF Plus questions the applicability of the qualification and experience for the position that Mtimkulu holds at present.

“This strengthens the FF Plus’ request to the Public Service Commission to investigate the issue. The PSC had in 2005 issued official guidelines to the public service and public institutions to properly investigate candidates for public positions.

“The FF Plus will lay criminal complaints with the police against all the relevant persons, including Prasa’s chief, Mr. Lucky Montana, if any irregularities are found. Mr. Montana is the chief accounting officer in terms of the Public Finance Management Act who has to see to it that Prasa’s resources are utilised effectively and responsibly.

“The FF Plus will also continue with its investigation into the validity of a doctorate degree that Mr. Mtimkulu had apparently received at a university in Germany,” Adv. Alberts said.

Walter Aylett on his bullishness towards Rupert’s Reinet