The City of Johannesburg’s Department of Economic Development is pleased to announce a total of R17 292 585 992.85 in total rand value of facilitated investment, at the end of the 2018/19 financial year.

An internal audit report has revealed that in the preliminary figures the City under-reported by R937, 300,000.00

The reported investment target is made of 47 individual investments that made the total. A breakdown of these can be seen below for each individual quarter:

Given that when the multi-party government came into office, the City facilitated only R4,4 billion in investments, this is a great achievement indeed. 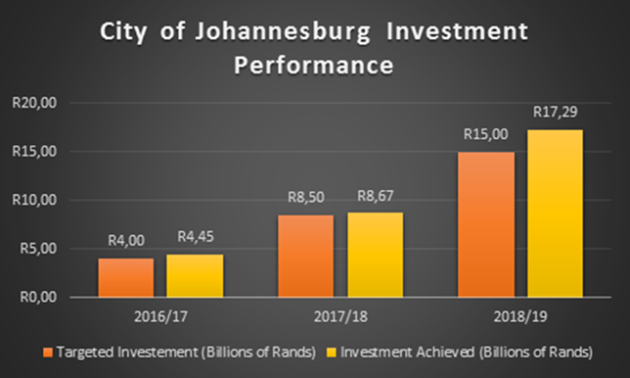 It has been the main task of the City’s Department of Economic Development to ensure that the economy of Johannesburg continues to grow at rapid rate.

Investment is an indication that the multi-party administration is well on the path of realising the five percent economic growth, ultimately curbing rising unemployment, by 2021.

The audited figures have also shown an increase of 17 277 in the number of SMMEs supported.  This is an increase of about 500 from the initial figures in the preliminary report.

SMMEs are the backbone of this economy, creating much-needed jobs. Our role as government is to ensure we create an enabling environment for SMMEs to keep growing. This has been a great achievement for this administration, with the numbers bearing testament that we are indeed on the right track.

To date the City has opened seven Opportunity Centres across the City to assist small business owners to run sustainable business that will create jobs. These Centres operate as one stop shops, offering various free services including mentoring workshops, assistance with business registration and compliance, and advice from qualified business advisors.

We have received numerous success stories from our opportunity centres in Alexandra, Diepsloot, Klipfontein and the Inner-city. It is clear that entrepreneurs and jobs seekers are finally linked to real opportunities.

The objective of this multi-party government is restore hope and to ensure that every citizen is afforded an opportunity to participate positively in the economy of Johannesburg, bringing Diphetogo to the residents of our City.

As a collective, we are able to turn around this City and ensure our children inherit a better Johannesburg than we did.

We would like to thank the members of this coalition government; the IFP, ACDP, COPE, UDM and Freedom Front Plus for their continued support, in helping us achieve this performance.

We would also like to thank the EFF for their contributions which, although not a member of the coalition, vote with us on an issue by issue basis.

Homeless are not being fined – Joburg