The racism of the leadership of #ReformPUK is quite evident when you page through the Facebook comments of Tsholofelo Motlogeloa, its leader. In one of these, he writes: “I hate white people with [a] passion [and] they must fucken [sic] go [back] to Europe... [I’m] sorry God”. And in another: “I hate a white man, [I’m] sorry guys they [are] bad people”.

“Although shocking, I can’t say that we are surprised. Since day one we have warned that #ReformPUK was based on racism and that its leadership’s comments often boiled down to racism and intolerance towards other students,” said Eduan Dupper, spokesperson for AfriForum Youth.

AfriForum Youth will submit a formal complaint about these comments to the North-West University’s Management, the Student Representative Council at the Puk campus and the Puk office of the Human Rights Commission tomorrow. Motlogeloa made these comments already in 2012 on his Facebook page, which was greeted with heavy criticism by most of his Facebook friends.

“It will be interesting to see how the University’s management will act against Motlogeloa. We demand that he be banned from campus, because his racial politics and polarisation on campus do not hold anything good for the Puk. We also request the NWU Council to reject #ReformPUK for these reasons,” Dupper concluded.

AfriForum Youth’s Puk branch last Friday handed a memorandum to Prof. Dan Kgwadi, Vice Chancellor, to bring Motlogeloa’s racist remarks to his attention.  He has not yet reacted. 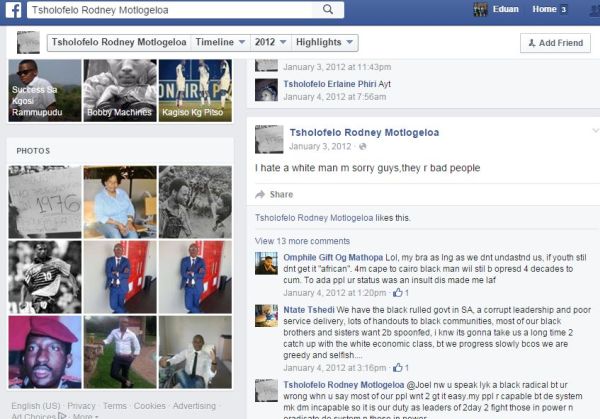 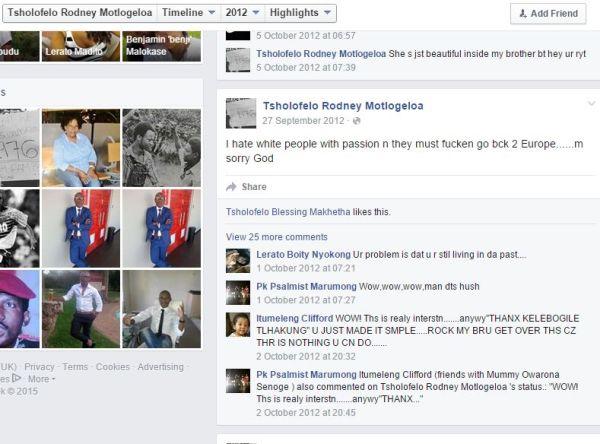 We draw the line at NWU - AfriForum Youth