Important new calculations have been released by Statistics SA, which give a more realistic picture of the shocking extent, and continued persistence, of extreme levels of poverty in the country.

An important new report by Statistics SA released on 3 February 2015, states that recalculation of their poverty lines, using 2011 as the baseline, shows that more than half the population (53.8%) live in poverty. This vindicates the view of COSATU and a number of progressive research organisations, who have long argued that previous official poverty lines (including the one used in the NDP) are not a realistic reflection of the extent of poverty in the country.

Even the Upper Bound Poverty Line, on which this figure - of 53.8% living in poverty- is based, is a very conservative measure which is lower than the calculations of university based institutions on a basket of goods and services needed for a family to survive. Nevertheless we welcome Stats SA's recalculation of their poverty lines as an important step towards establishment of a realistically set official national minimum living level.[1]

It strongly reinforces COSATU's view that poverty is a national crisis. It also strengthens the case for a national minimum wage, a basic income grant and comprehensive social security, which the federation is campaigning for.

1. "Extreme poverty", defined as only being able to afford a very minimal basket of food, and nothing else;

2. An "austere poverty line", defined as a level below which one has to sacrifice some food to obtain some basic non-food items; and

3. An "upper-bound" poverty level, which measures the income people need for a small basket of absolutely essential items, after meeting their basic food needs.

Stats SA has ‘rebased' (or recalculated) all these figures for 2011, meaning that the figures for poverty lines in subsequent years are also increased.

In 2011 this figure was R321 per month. Stats SA's rebasing of this figure increased it by around 10%to R355 in 2011. Based on this recalculation the food poverty line in 2014 would be about R440 per person per month (pp/pm) - see Stats SA National Poverty Lines table below.

The report states that based on this recalculation, the number of South Africans living in extreme poverty (and therefore facing extreme hunger) increased from 20.2% of South Africa's population to 21.7% .

The figure for the slightly higher "austere poverty line", or lower bound poverty line - the level below which one has to sacrifice some food to obtain some basic non-food items, including airtime and transport costs - is revised upwards from R443 to R501 in 2011 prices, per person per month. This is a 13% increase. Therefore the lower bound poverty line in 2014 (originally calculated as R544) would increase to around R615 pp/pm. The Report calculates that the percentage living in poverty, based on this extremely low poverty line, increased from 32,3% to 37% in 2011.

Statistics SA's third "upper-bound poverty level" measures the income people need for essential items after meeting their basic food needs. Stats SA ‘rebased' or recalculated this figure for 2011 from R620 per person a month to R779 pp/pm in 2011, or around R946 pp/pm in 2014, which is still a very basic, minimal amount. Based on this recalculation, the number of people living below this level increased from 45.5% to 53.8%, more than half the population!

Most importantly, this new information from Stats SA on the upper bound poverty line (UPBL) has critical implications for the current national debate around a national minimum wage. The rebased UPBL in 2014 values is around R946 per person per month.

Low income workers in South Africa do not just support themselves but on average four dependants, and in many cases even more. Based on the R941 figure for "upper-bound poverty", in 2014 prices - which is significantly lower than university-based calculations of the Minimum Living Level - that means the average worker would need to earn at least R4730 per month merely to save his or her family from poverty. And those with more dependants would require more.

Yet hundreds of thousands of workers earn way below the amount suggested by this officially defined poverty line, if we assume they have to support four dependants - a very realistic assumption for low paid workers, whose families suffer the greatest levels of unemployment. Half of South African workers in 2013 earned less than R3033 per month. And the minimum wage in most sectoral determinations, and even some bargaining council agreements, are way below this broad minimum living level.

It is intolerable that so many workers, even those covered by sectoral determinations, which are supposed to protect the most vulnerable workers, are living below the poverty line, which itself falls way below what COSATU and workers regard as a basic minimum living level, supported by the work of university research institutions, which is roughly between R5000 and R5500 a month, in 2014 prices.

These latest statistics will make COSATU even more determined to fight for a national minimum wage (NMW), linked to a minimum living level, to help vulnerable workers escape the poverty trap which current sectoral determinations condemn them to, and to protect those thousands of unorganised, casual and temporary workers who are not even protected by the sectoral determinations, but paid whatever pittance their employers decide.

The NMW would be popularised amongst workers, employers and government officials, so that everyone would know that no worker could legally be paid below the that level and no worker whose wage is higher than the NMW could have their wages reduced to the amount of the NMW.

Sectoral Determinations, if they remain, could only set wages at a higher level than the national minimum wage, which must progressively achieve the minimum living level, which should be established as an official measure.While we still have such massive level of unemployment the NMW must be complemented by the urgent introduction of comprehensive social security and a basic income grant to cover those with no jobs - currently sitting at around 8 million.

In the longer term however the problem of poverty is inseparable from the need to radically restructure our economy - what the ANC calls the second phase of the democratic transition. We totally disagree with the ANC that the NDP as a policy platform represents anything remotely linked to a notion of a radical economic transformation.

These statistics serves as a reminder of how far we still have to go in realizing the economic goals of the Freedom Charter and the Reconstruction and Development Programme. We need to build an economy which is driven by development of our manufacturing industry, which creates thousands of decent jobs, increases the country's wealth, distributes that wealth and assets equitably and transforms the lives of all South Africans.

Combined with unemployment over 36%, the 8th highest level in the world, and with inequality the widest in the world, these statistics from StatisticsSA spell disaster for South Africa, even as we celebrate the 60th anniversary of the Freedom Charter which promised us that "The People Shall Share in the Country`s Wealth!" 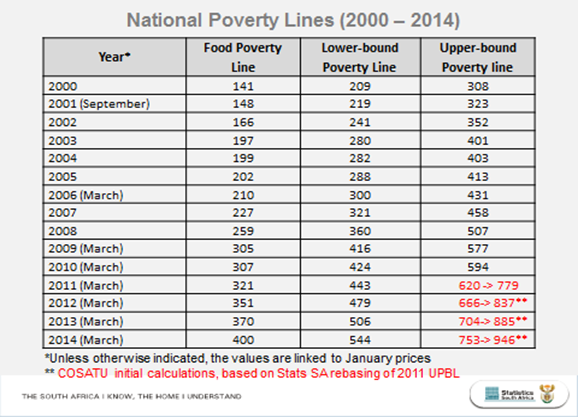 [1] Our economists have however raised certain concerns with the report, including a number of technical questions relating to the analysis of the data, and the construction of Provincial poverty lines, which we hope to engage Stats SA directly on. Nevertheless the report is a step forward in important respects.