Daily Sun (April 23 2014) - COPS are hunting for a gang of robbers who allegedly shot six people dead at the weekend. And the so-called Basotho Gang can only hope cops find them.

ENRAGED SQUATTERS SAY THEY'LL KILL THEM IF THEY CATCH THEM FIRST!

"They kill and rob people as they cross over the railway to the squatter camp," Maxwell said. "Cops do not arrest them."

Nokuthula Ganda (27) told Daily Sun yesterday about the last time she saw her husband, Mike Fikaredo (36) on Saturday night, when he left her in their car to walk his sister-in-law home to her squatter camp shack.

Nokuthula was waiting anxiously in this dangerous area in the dark when she heard shots.

Her husband, sister Manini (24) and Manini's seven month-old-baby Bulelwa were gunned down crossing the railway line at Gugulethu/Everest.

Cops identified the fourth victim of the Saturday killing spree as Bulelani Zungu.

They couldn't identify the other victims as they were still trying to trace their families.

On Sunday, angry residents went to find the gangsters at the shack they rented from Neo Molelle. But there was no sign of them. Residents tore down the shack and found two guns, which they handed in at the local police station.

They wanted to beat Neo, who they accused of harbouring killers. But she said: "I didn't know they were involved in crime. I couldn't refuse when they wanted a place to stay."

She said she wasn't the only person letting shacks to the men. On Monday, cops went to fetch Neo at her shack. She fainted in their car when they threatened to arrest her.

The cops revived her with cold water and left without her. Captain Johannes Ramphora said cops were searching shacks yesterday for Basotho gang members. He confirmed that six people were shot dead and two guns were found in the destroyed shack. 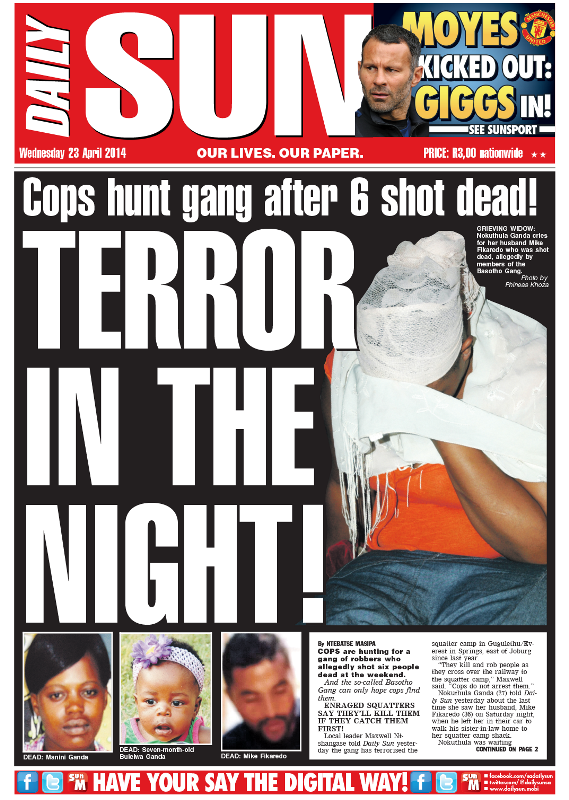 The Daily Sun is South Africa's largest daily newspaper with an average circulation of 297,614 (Audit Bureau of Circulations 4th Quarter 2013) and a readership of 5.7m (as per AMPS 2012ab). Its Facebook page can be accessed here. It can be followed on Twitter here. To find about advertising on the Daily Sun click here.