Tito Mboweni needs to get a grip - David Maynier

Tito Mboweni needs to get a grip, and start acting like a finance minister, in SA

Last night, the new Minister of Finance, Tito Mboweni, had a “meltdown” on Twitter.

He declared “war” on editors, claiming the “time to be gentle is over”, and threatened “collateral damage” in a series of Tweets. 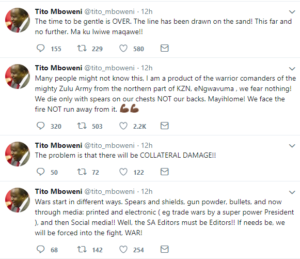 Tito Mboweni’s meltdown is presumably related to reporting on the humiliating “smack down” following his call to close down South African Airways.

His attack on editors for reporting on the “smack down”, which are the result of deep divisions, within government, and within the governing party, was a mistake.

The fact is that Tito Mboweni needs to get a grip and start acting like a finance minister who is actually capable of dealing with the economic crisis in South Africa.

A good place to start would be for him to stop Tweeting and start focusing on the 9.75 million people who do not have jobs, or who have given up looking for jobs, in South Africa.

ANC ministers are busy picking all our pockets - David Maynier

"Fellow inmates: Nothing will ever be the same again – Anton Roux" - BizNews