The National Treasury tried to pass off the meeting as part of “normal ongoing engagements with stakeholders in the country”. 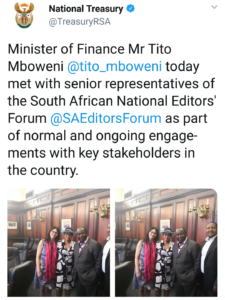 This is an outright lie because there was nothing “normal” or “ongoing” about the minister's meeting with SANEF.

The truth is the meeting was convened after the minister declared “war” on editors during a meltdown on Twitter. 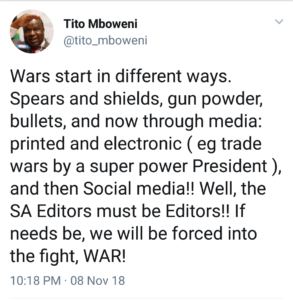 The minister’s damage control is flawed because he is not being open and honest about his meltdown on Twitter.

Rather than trying to resolve this matter in a private behind-closed-doors meeting, and then trying to suggest that the meeting was part of normal and ongoing stakeholder engagements, the minister should be open and honest about his meltdown on Twitter.

The minister could start by:

- issuing a public apology for his attack on the media and committing to upholding press freedom in our country; and

- explaining the reasons, including the reasons why he thinks his “rights were seriously violated by unethical journalism”, which culminated in his meltdown on Twitter.

It’s time for the minister to change course and be open and honest with the public about his attack on the media and his meltdown on Twitter.

Tito Mboweni needs to get a grip - David Maynier

ANC ministers are busy picking all our pockets - David Maynier