AfriForum Youth today achieved success in the Equality Court in Pretoria after Luvuyo Menziwa, a member of the EFF’s youth wing at the University of Pretoria (UP), was found guilty of hate speech and incitement to violence.

The court ruled that Menziwa must, within five days of the court ruling, apologise for his actions and the negative consequences thereof on his Facebook page. He must furthermore perform community service, specifically in poor white communities.

This follows after Menziwa in 2016 made a post on Facebook in which he explains why he hates white people, and goes further to call for a bazooka or AK-47 with which to kill white people. 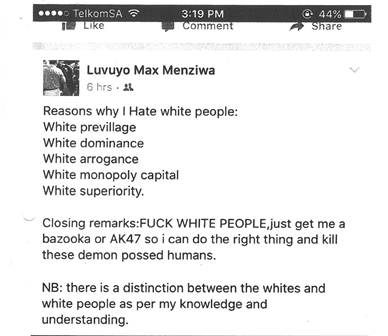 Henrico Barnard, former Student Council Chairperson at UP and member of AfriForum Youth, following this post, laid a charge against Menziwa in 2016 for hate speech and incitement to violence. “It is encouraging to see that political student leaders are not above the law. I want to emphasise that leaders should accept responsibility for their statements, and not make themselves guilty of cheap politicking,” says Barnard

“AfriForum welcomes the ruling as those, regardless of their colour, who make themselves guilty of hate speech and incitement to violence should be punished by the courts. We however note that Menziwa’s punishment is not nearly as severe as that of Penny Sparrow, even though Menziwa’s statement contained an element of violence. Likewise, many media houses constantly focus on cases of so-called racism where white offenders are involved, but in this case, where a black individual was found guilty of the same offence, it was not covered,” says Henk Maree, Head of AfriForum Youth.

COSATU should learn from Solidarity

Why the ANC needs 'racism' to survive - DP

JM Coetzee, Disgrace and the demon of white racism - ANC

The dumping of JZ

Exposed: Municipalities have diverted billions from the poor, depriving them of free basic electricity