Today, 4 January 2018, Angie Motshekga, the Minister of Basic Education is scheduled to announce the National Senior Certificate results for the country.

It has been a long anxious wait for the NSC candidates who wrote in the Western Cape, as well as their parents and our Department.

While there is a tendency to focus solely on the provincial pass rate (which is an important indicator), we must also consider other important factors and indicators of success so that we can then determine if the system is ultimately improving or where it needs to be improved.

Traditionally, this Province has put particular emphasis on the number of candidates writing and passing the NSC examinations, achieving access to a Bachelor’s Degree pass and passing mathematics and science, as well as the performance of our underperforming schools and the retention of learners in the system.

Last year, in response to a Parliamentary question, Minister Motshekga confirmed that the DBE is looking at a different way of reporting NSC results. In an effort to highlight the important criteria in obtaining a quality pass. This was called the "Inclusive Basket of Criteria”, and takes into account important indicators such as the percentage of physical science and mathematics passes, the throughput rate, distinctions and bachelor passes.

Minister Motshekga indicated in the Parliamentary reply (see attached) that the new "Inclusive Basket of Criteria" is a "more integrated approach to reporting that reflects the key indicators of learner performance".

The Western Cape Province has always said that the quality of the pass is more important than purely the league table position. We will therefore be very interested in the performance of our Province, as well as each Provincial Education Department in Matric 2017 in terms of the "Inclusive Basket of Criteria". We would like to see that this will be released today, along with the overall matric pass rate.

The throughput rate is of particular concern to us, as the number of learners writing the full National Senior Certificate, as opposed to dropping out or writing a few subjects through the Multiple Opportunities route, can drastically affect the overall pass rate. We believe that retaining more learners in the system and giving them the opportunity to pass the NSC is more important than “losing” learners along the way so that schools can achieve a higher pass rate. This was clearly seen in last year’s results.

While the Free State Province achieved the highest percentage pass rate overall in terms of the league table, it was in fact the Western Cape that emerged as Number 1 using the "Inclusive Basket of Criteria”.

Please see table below as released by the DBE of the 2016 results. 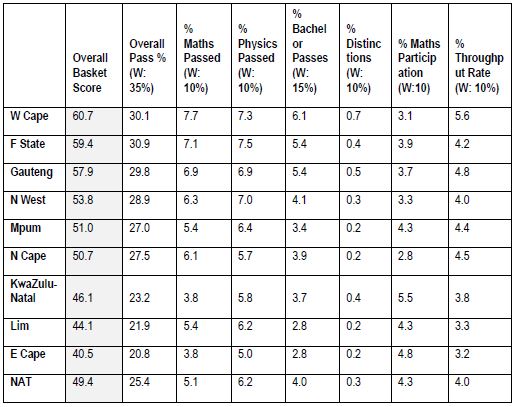 Reporting on the ‘Inclusive Basket of Criteria’ today will ensure that an accurate reflection of the overall achievements of Provinces is revealed.

Schools and candidates in the Western Cape will receive their results on Friday 5th January 2017. Schools collect the results from district offices on the morning of the release. They are then asked to analyse the results and check for any errors.

The results will then be made available to candidates at 11h00 on Friday (instead of usual 12:00) to accommodate anyone wishing to attend mosque.

The individual candidate results will then be available on the Western Cape Government website (http://www.westerncape.gov.za/service/examination-information-and-results) from 13h00 on 5thJanuary 2018.

Many parents and learners question why, in the Western Cape, learners have to wait until the following day to receive their results. This is done for a number of reasons which include the fact that principals examine the results to pick up any errors, and to alert the WCED regarding a candidate that may be disappointed by their results and need counselling.

The WCED has counsellors available across the Province should candidates need assistance.

To the class of 2017, we have every confidence in our 2017 NSC candidates who have worked hard throughout the school year. We wish them the best of luck as they await their much anticipated results.

Our problems with the schools amendment bill - Debbie Schäfer

The effect of gang violence on WCape schools - Debbie Schäfer

The DA needs to raise its game

The battle for Tshwane

A guide to the lockdown rules

"Editorial: We're all in this together • #CoronavirusSA & adland • #AdChamps of the Month" - MarkLives