THE Democratic Alliance has plummeted to new levels of desperation in its frantic campaign to hold on to the Western Cape, a province where we are confident of ousting them from power.

Their outgoing Premier, Helen Zille is sailing close to treason by suggesting a tax boycott and should be investigated for her utterances.

“We call on her to withdraw this irresponsible statement and rather unite in action to grow South Africa. We also call on business leaders and workers leaders to repudiate her statement,’’ said ANC Western Cape elections head Ebrahim Rasool in a statement.

Rasool added: “Not even an election is worth the devastating consequences of her statement. We call on her party leader Mmusi Maimane to come out and tell us where he stands on these calls. Does he support a tax boycott or not? We want to know.”

In the past few days, said Rasool, DA has gone on a negative campaign drive in which it has tried to convince voters to keep the ANC and another political party out of the Western Cape. The other party, known for its racist rhetoric, is the DA’s coalition party in Metros such as Johannesburg and Thswane.

Their support is what keeps the DA in power there. Yet in the Western Cape, the DA wants to keep this party out.

“We are appalled by the DA’s messaging. In stead of giving vent to to their negative campaigning, the DA should find examples of their governance successes in the Western Cape,” said Rasool.

He said the in the Western Cape the DA returned unspent housing budgets, messed up water management, imploded the thriving economy that they had inherited from the ANC and also oversaw a drop in the matric pass rate.

“So when your cupboard is bare, reach for that tried and tested DA vote-catcher: swartgevaar tactics. But that’s not all. Helen Zille has reached new levels of trying to sabotage our economy by publicly mooting a tax strike. While our president is at the World Economic Forum in Davos rallying support for our country and trying to encourage investment that will create more jobs, she makes her irresponsible statements. This is as close to treason as one can get.”

Rasool said: “The DA is a party of deceit and lies and its days are numbered. This weekend we will register thousands of voters who believe in the ANC and the message of a new dawn, change, unity, non-racialism and a South Africa that belongs to all who live in it as enunciated by our president Cyril Ramaphosa.” 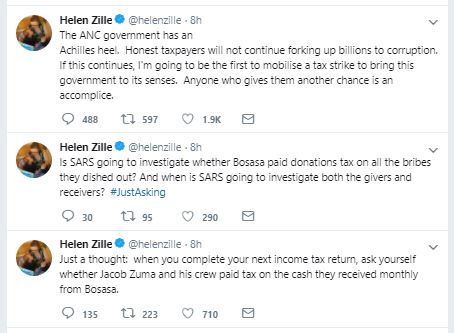 Zille: No conflict of interest in son's involvement - Angie Motshekga