A new and improved and larger GDP is here – Stats SA

Revised GDP at current prices shows that the economy is 11,0% larger in 2020 than previously estimated

A new and improved GDP is here

Stats SA has finalised a comprehensive overhaul of its national accounts. The latest gross domestic product (GDP) rebasing and benchmarking exercise has resulted in an upward revision in the size of the economy, as well as changes to the composition of the supply and demand sides of economic activity.

Any statistical agency worth its salt should periodically revisit the way in which it measures the economy. Economies are dynamic, shifting and changing over time. New industries rise to dominance while others fade away, consumer tastes wax and wane, and new technologies replace the old. Rebasing and benchmarking exercises ensure that the tools used to measure the economy take these changes into account.

It is not affordable to measure these economic shifts on a regular basis. Many data sources that underpin the national accounts are only available periodically.

The South African economy is 11% larger

Overhauling the way in which we measure the economy provides a far more relevant and reliable measure of GDP. With the adoption of new methods, new data sources, and a new base year, Stats SA has revised the entire set of GDP-related time series. 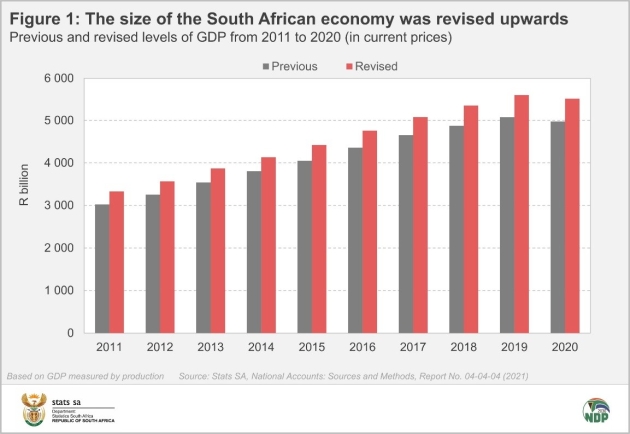 Differences between previous and revised levels are a typical outcome of rebasing and benchmarking exercises. When Nigeria overhauled its GDP in 2014, it discovered that its economy was about 60% to 90% larger than previous estimates.1 The average increase between previous and revised GDP estimates across OECD countries was 3,8% in 2010. This ranged from 0,2% for Luxembourg to 7,8% for South Korea.2 Latin America recorded an average increase of 8,8%3, and closer to home, Botswana revised the size of its economy down by 10%.4,5

How does South Africa’s revised GDP affect its standing in Africa? In terms of purchasing power parity (PPP), the World Bank currently ranks South Africa as the third biggest economy on the continent after Egypt and Nigeria.6 Egypt’s GDP (PPP$ in current prices) was PPP$1 290 billion according to the World Bank’s estimate, higher than that of Nigeria (PPP$1 069 billion) and South Africa (PPP$717 billion). If the 2020 World Bank figure for South Africa is adjusted by Stats SA’s upward revision of 11,0% (i.e. to PPP$796 billion), our economy still lags behind the powerhouses of Nigeria and Egypt. 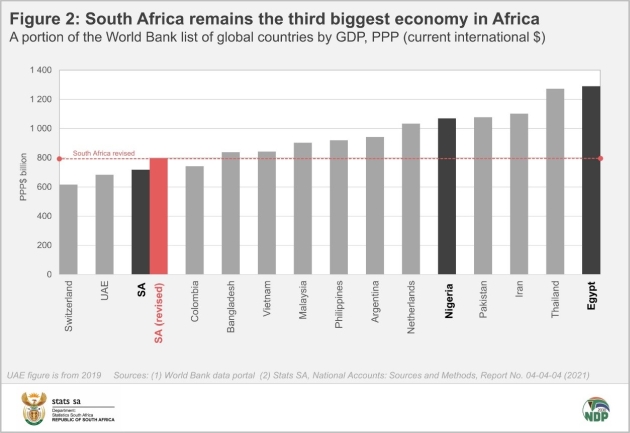 On the world stage, the revision pushes South Africa above Colombia.

Growth rates have shifted too

South Africa’s previous and revised GDP growth rates are similar in magnitude and in pattern, with the largest difference occurring in 2018 (Figure 3). Both the revised and previous series show the severe impact of COVID-19 in 2020 (‑6,4% revised and ‑7,0% previous). 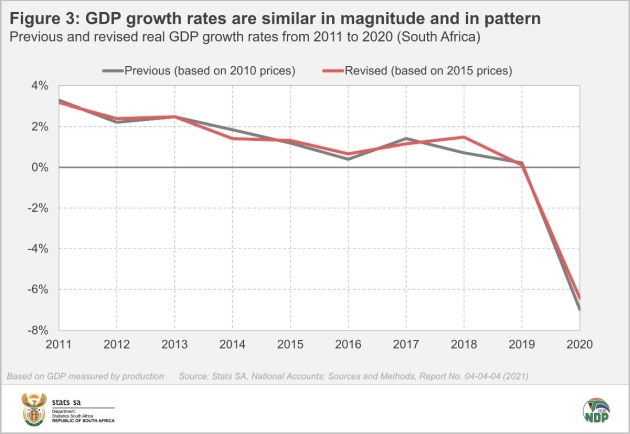 An adjustment to the structure of the economy

The rebasing and benchmarking exercise includes an improved method of classifying economic activity on both the production (supply) and expenditure (demand) sides of the economy.

Previously, the outputs of various industries on the production side were allocated to the classification of the dominant industry, but this has now changed in order to reflect the economic activity where it occurred. The finance, real estate & business services industry is larger than previously estimated (Figure 4). This shift is due to an increase in coverage, methodological changes and better estimates of real estate activities. Finance, real estate & business services remains South Africa’s largest industry. 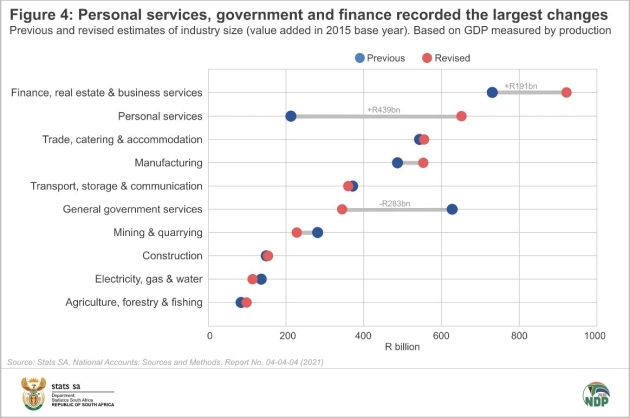 The steep fall in general government and sharp rise in personal services are closely linked. Education and health activities that were previously classified under government have been reclassified under personal services, as a result of improved methodology. The reclassification was implemented to conform as closely as possible to recommendations in the System of National Accounts (2008) as well as South Africa’s Standard Industrial Classification. It was made possible through information sourced from National Treasury’s Vulindlela database and Stats SA’s Financial statistics of consolidated general government publication.7

Not only does the reclassification allow for a better understanding of the structure of the economy, but it also enhances quality as price indices (for deflation) can be linked at a more accurate level.

On the expenditure (demand) side of the economy, the main difference between the previous and revised levels in 2015 is in household final consumption expenditure. 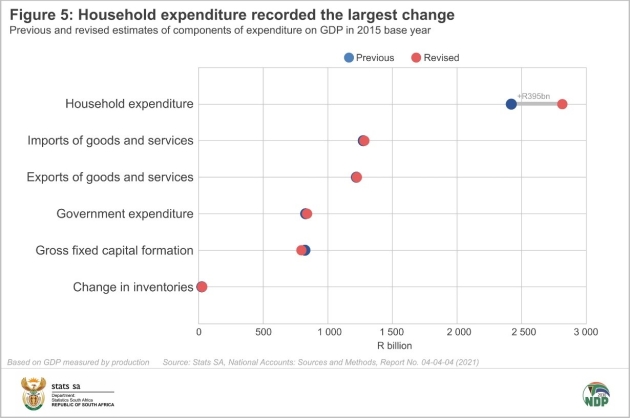 The upward revision was due to improved coverage and methodology, including the use of the latest available household and industry surveys. The household expenditure components of recreation & culture and restaurants & hotels recorded the biggest upward revisions.

Glancing under the hood

Overhauling the way in which national accounts are measured is a time-consuming and data-intensive endeavor. Stats SA published the results of rebasing and benchmarking exercises in 1999, 2004, 2009 and 2014. The five-year cycle was interrupted due to the extent of the revisions (noting that the compilation of GDP estimates was centralised in Stats SA in 2016) as well as the disruptions caused by the COVID-19 pandemic.

Every rebasing and benchmarking exercise is conducted according to internationally recognised methodologies and standards. South Africa follows the 2008 System of National Accounts as the guiding framework, along with other countries that have advanced socio-economic statistical systems.

The first activity is rebasing. This is the replacement of an old base year used to compile GDP estimates in constant prices (or real/volume terms) with a new, more recent base year. Since 2014, Stats SA has used 2010 as the base year in its calculations of real GDP. The base year has been changed to 2015.

Benchmarking is the second major activity. This involves adopting new data sources as a basis for the development of benchmarked level estimates of GDP (Figure 6). These datasets are typically highly detailed and periodic in nature. Examples include household income and expenditure surveys, structural industry statistics, and population censuses. 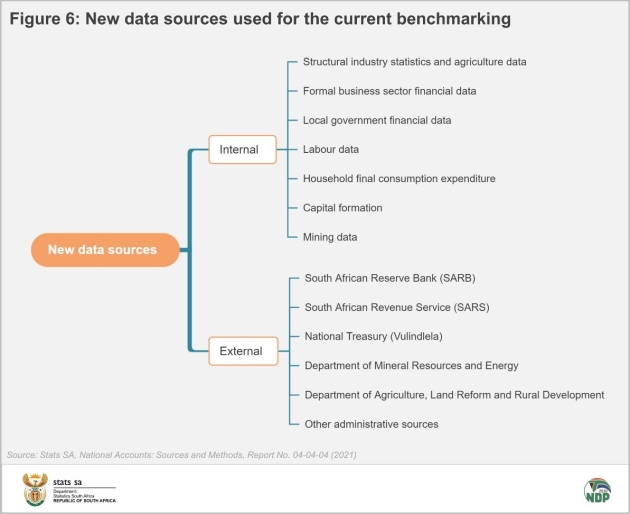 The third major activity is the implementation of new methodologies and updating of existing practices. Most notably in the current exercise, new industry and product classifications were adopted and a new supply and use table (SUT) framework was created (Figure 7). 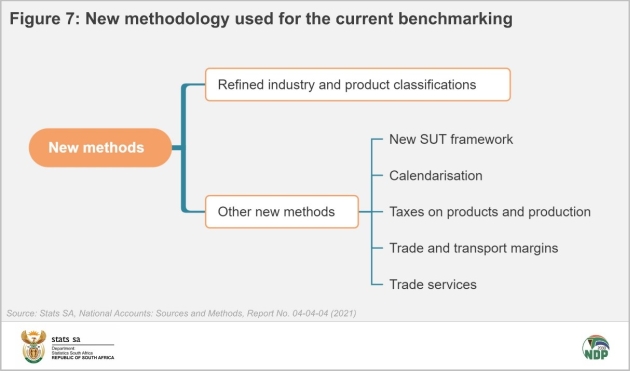 GDP is a measure that is used widely by researchers, government, international organisations and the private sector. A more accurate measure of GDP will improve indicators that use GDP as a source. Take GDP per capita, for example. The upward revision of the size of the economy means that the value of how much the economy is producing per person is now slightly higher than what was previously estimated. 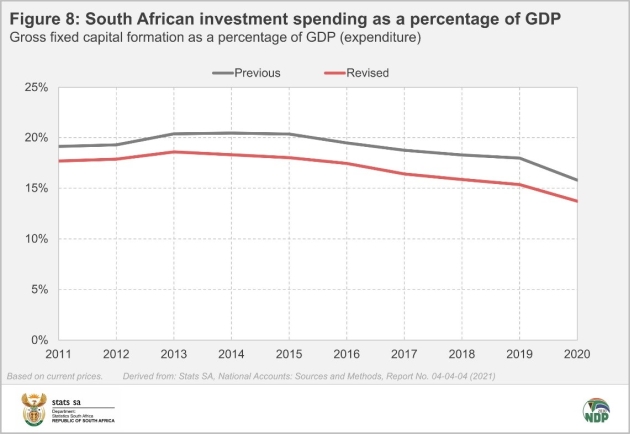 A third example is South Africa’s debt-to-GDP ratio. This will also be smaller using the new GDP values. Other examples of ratios that will be affected include equity-market capitalisation to GDP, government spending to GDP, and household debt to GDP, to name a few. Although these ratios will change, the trends and patterns will remain largely unaffected.

Interested to learn more? A complete sources and methods document, as well as the media presentation, is available here.

GDP increased at an annualised rate of 4,6% - Stats SA