It is commonly assumed that many of South Africa's daily newspapers, and particularly its broadsheets, are in a bad way. For a newspaper to maintain its paid circulation - year-on-year - is regarded as something of an achievement. And for it to increase its circulation is regarded as a major victory. Gill Moodie recently observed on this website that the Cape Argus and Durban's Daily News may well be shut down in the next five years.

In order to get a better idea of the state of the newspaper market Politicsweb pulled together the available Audit Bureau of Circulations (ABC) data for average net sales of daily newspapers from the 1st Quarter of 2006 to the 2nd Quarter of 2011. We excluded bulk sales, travel & commercial subscriptions and print media in education (PMIE) sales as these can have a distorting effect when analysing trends and making comparisons. We focused solely on the core circulation of the newspapers: a combination of copy sales and individual and business subscriptions.

What the ABC data shows

The only three newspapers to show an increase were the Diamond Fields Advertiser (off a very low base), the Zulu-language tabloid Isolezwe, and Die Son. The starting figures for Die Son are from the 4th Quarter of 2006 as this was when it was launched as a daily (having previously been a weekly.) Its core circulation peaked at 124 572 in the fourth quarter of 2009, so it is 15,3% down from that.

* These figures for Die Son are from 4th Quarter of 2006 as this is when it was launched as a daily. 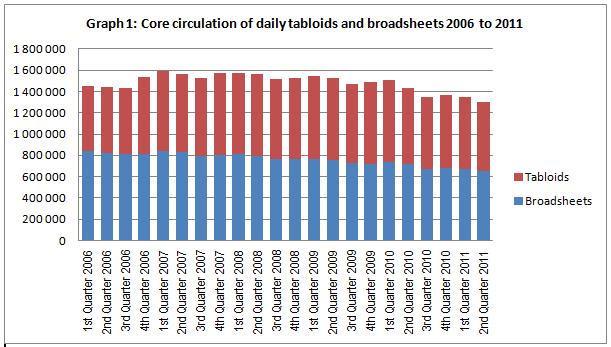 It is important to note however that this is not a complete picture of the daily newspaper market. The New Age and Daily Voice are not registered with the ABC so their circulation figures could not be included in the analysis. The Times meanwhile falls under a different category (combining paid with unpaid circulation) and it is not included in the trend analysis either. However, in the Second Quarter of 2011 the newspaper (which has a registered cover price of R1) had average paid circulation of 38 237 in copy sales and 76 258 in subscriptions - the latter bundled with Sunday Times subscriptions. A further 32,729 copies were distributed for free.

It is clear that many of South Africa's individual daily broadsheet newspapers are in trouble. As Graph 2 illustrates these newspapers are almost all suffering from long term declines in their core circulation (off already low bases, compared to the tabloids). Their readership appears to have been cannibalised on one end by cheaper tabloid rivals and from the other by the news websites. If declines in core circulation continue, or even accelerate (as is likely - given the rapid growth of internet access), many of South Africa's broadsheets will find themselves in serious difficulty within the next five years.

What seems to be providing some protection for these newspapers is that advertisers have yet to substantially shift their spending from print to online - as they have done in the United States. Thus, despite serious declines in the core circulation of most of its titles - though not the Daily Voice or Isolezwe - the Independent Newspaper Group has maintained its absurd profit margins. According to the Independent News and Media's 2010 annual report the group was able to wring €43.5m of profit out of €206.2m of revenue from its South African operations - a 21,1% margin.

As Gill Moodie notes, in order to compete in the internet age newspapers need to provide original high quality content to differentiate themselves from their print and online rivals. The risk is clearly that many of the broadsheets may be entering into a death spiral: with declining circulation leading to declining revenues, leading to cuts in editorial, resulting in further declines in circulation and so on.

The key to survival for many publications is getting online to pay. Newspapers such as the Wall Street Journal, Financial Times and New York Times have had some success with online subscription models. But these are all papers with very strong editorial content. With the possible exception of the Afrikaans newspapers and perhaps Business Day (if it bulked up quite a bit) the editorial content of the dailies is not distinct or original enough to justify such a model. Readers in South Africa are not going to pay for the commoditised news and recycled wire copy which is the staple of South Africa's English language broadsheets.

The massive growth of the tabloid market has been the great newspaper success story of the past decade. However, the past few years have seen a decline in core circulation of a number of these titles (see Graph 3). Broadband internet access, through smart phones, is also beginning to fall within the reach of working class South Africans. Thus, the tabloids too are going to start having to compete with online for readers. 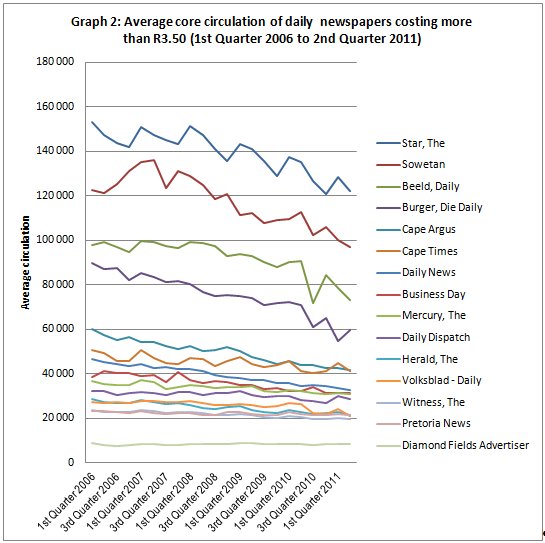 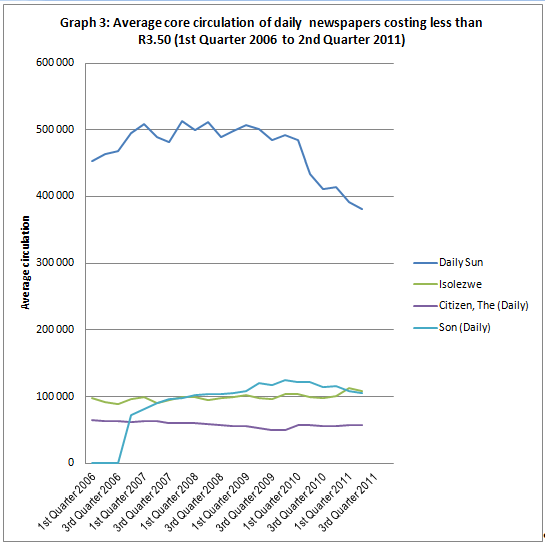 How SA's newspapers can save themselves

Who buys the Sunday Times?

MUST WATCH: 72 HOURS OF ANARCHY – a first-hand account of the civil unrest in July