Daily Sun (January 5 2014) - ALL NIGHT and into the early hours of the new year, the party carried on at the fourway stop.

But the happy revelry soon turned into a horror story when bullets started to fly.

AND SOON THE NECKLACED, NAKED BODY OF AN OFF-DUTY COP LAY ON THE GROUND.

Yesterday witnesses told Daily Sun how the police officer - a man they described as a "cop from hell" - arrived in a 4x4 bakkie at the fourway stop where the party had been going on, and fired shots into the air.

Then, after having made his way through the revellers in the middle of the road, he allegedly fired into the group behind him. "He took careful aim as though he was trying to display his skills with a firearm. He appeared to be extremely drunk," said a resident of Winterveld, Tshwane, who was also at the party which had started at the Maplankeng Tavern.

Angry patrons confronted the man and managed to disarm him, but then the events took a turn that was even more horrible. The man was stripped naked and beaten with rocks and bottles, then paraffin was poured over him and he was set alight. Finally, the policeman was necklaced with a burning tyre and he died at the scene.

When cops arrived, the other passengers in the 4x4 were taken away before the crowd could attack them as well.

Meanwhile, one of the people shot, Katlego Mahlangu (18), died after he was rushed to the local clinic. His grandfather, Moses Mwale (59), said: "We are hurt. We don't know what to say."

The other two victims were admitted to hospital in critical condition. The deadly drama caused the Molefe Makinta Highway to be blocked off for about three hours. Sergeant Thembi Nowathe of the police told Daily Sun: "Two counts of murder are being investigated by Loate Police." 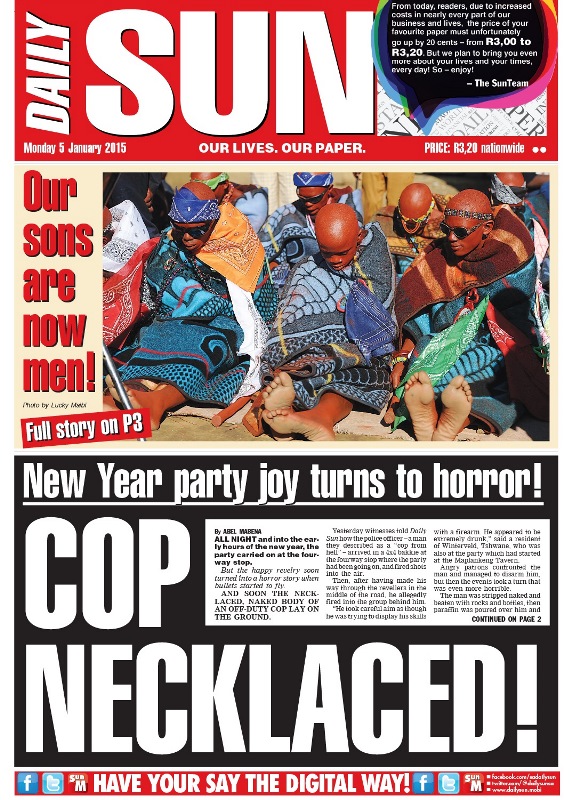