The last Afrikaner leaders: A supreme test of power

The Last Afrikaner Leaders: A supreme test of power

Respected historian Hermann Giliomee (author of The Afrikaners) takes a fresh and incisive look at five of the most influential Afrikaner leaders - and how and why their best laid plans went tragically and horrifically wrong.

From H F Verwoerd - who ironically undermined apartheid irrevocably with his schools plan - via the pompous and imperial John Vorster, and the finger-wagging PW Botha to FW de Klerk with a detour for F Van Zyl Slabbert: each leader's policies, reasoning and foibles are explored to great effect.

Who knew that Verwoerd based his thinking on erroneous population data, that PW Botha had a first stroke which was never revealed to the public but greatly compromised his judgement, or that the Rubicon debacle depended on a misunderstanding?

Giliomee offers a fresh and stimulating political history which attempts not to condemn but to understand why and how these last Afrikaner leaders did what they did, and why their own policies ultimately failed them.

"Extremely well written - a solid core, but with a lightish, easy-to-read touch. In a quite remarkable way, you have taken a much traversed subject and turned it into really exciting reading - fresh and suggestive new insights wait around every corner. Very stimulating. Very good touches on PW's temper and rages."

- Stanley Uys, writing to Hermann Giliomee after reviewing the manuscript.

The book can be purchased online here. The Afrikaans version is available here.

* Prices are subject to change

Hermann Giliomee is Extraordinary Professor of History, University of Stellenbosch, and was a Fellow at Yale, Cambridge, and the Woodrow Wilson Centre for International Scholars.

His 15 books include The Shaping of SA Society, New History of South Africa (with Bernard Mbenga) and the magisterial The Afrikaners - Biography of a People, which was also published to acclaim in the USA and in the UK.

Hermann Giliomee is the widely acknowledged world expert on the history of the Afrikaners in South Africa. His views are consistently fresh and challenging, and he is does not shy away from controversy. In fact, he relishes debate and his life's work consists of finding new angles undermining received dogma and refusing to be politically correct. He has interviewed many of the players from the last years of apartheid, many of whom are getting older and want to "come clean". This book will reveal much of the behind-the-scenes thinking and shenanigans in Nat circles, often for the first time.

Hermann Giliomee writes in a lively narrative style which makes his work a pleasure to read. 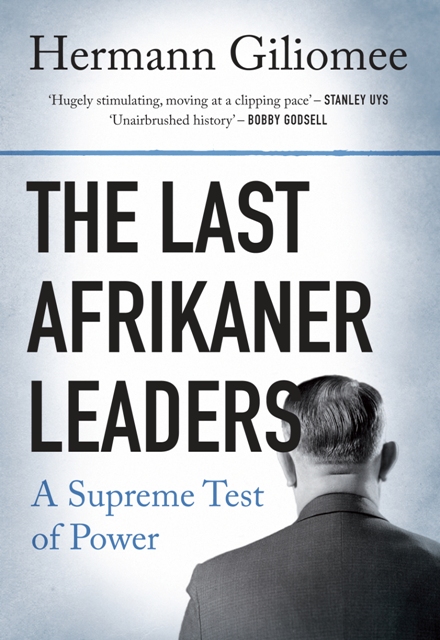 Issued by Tafelberg through the Politicsweb iService

Education in SA: Is Verwoerd to blame?