A pamphlet that has been branded with an ANC logo and election messaging, encouraging people to collect free, government-sponsored set-top boxes (STBs) or decoders from the nearest post office, is doing the rounds on social media.

This is a blatant abuse of taxpayers’ money and must be stopped.

I have written to the Minister of Communications Ms Nomvula Mokonyane, who is the Cabinet leader of the Broadcasting Digital Migration (BDM) project - of which the decoders are a component - and responsible for its marketing, to put an immediate stop to the flyers’ distribution and have them destroyed.

I have also written to ANC National Executive Committee member Dr Siyabonga Cwele, Minister of Telecommunications and Postal Services, who is responsible for the government entities procuring and distributing the decoders to demand an investigation within the ANC to determine who instigated the abuse of a government-funded project under his watch for election purposes and to hold these people to account.

The first phase of the STB rollout is being done via post offices, mainly close to South Africa’s northern borders and Northern Cape. Recipients undergo a certification process to determine they come from a household that has a monthly income of less than R3 200. The decoder enables them to continue watching free-to-air TV as it converts digital broadcast signals into analogue signals needed by old TV sets.

The procurement process for first tranche of 1,5 million decoders procured by the Universal Services Access Agency of South Africa was halted in October 2016 because of a legal challenge on the encryption issue, a National Treasury commissioned enquiry into the tender process which indicated corruption and subsequent Auditor General adverse findings.

USAASA is enmeshed in subsequent legal battles with most of the awardees of the batch of STBs over the halting of their orders. And its CEO Mr Lumke Mintimde has been suspended by the USAASA board, a move that he is legally challenging.

South Africa missed the international deadline for BDM of June 17, 2015.

The much delayed BDM project aims to migrate all broadcasting from analogue to digital technology, freeing up spectrum bands to be used for mobile broadband products and services. Various misguided political decisions and suspicions of major TV broadcaster influence on the policy of whether the government-sponsored decoders would be encrypted have delayed for years the migration.

The Minister of Communications now claims that a new deadline of mid-2019 has been agreed to with the International Telecommunications Union (ITU), a date that coincides with South Africa’s next general election.

Correspondence I have had with the ITU office in Geneva shows that there is no 2019 deadline for South Africa. A parliamentary question I submitted to the Minister asking documentary proof of the ‘new’ deadline has not been answered. 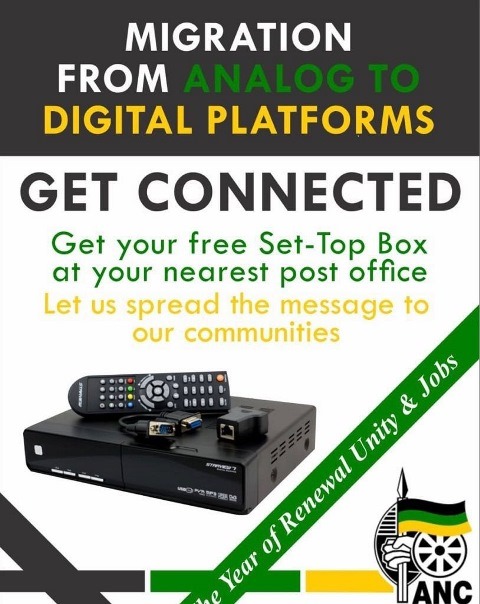