Ramaphosa gets his 4th nod from Gauteng

Pretoria - The ANC in Gauteng has become the fourth province to put its power in Deputy President Cyril Ramaphosa.

He received 374 Nominations to become the party’s next president when Jacob Zuma steps down at the ANC's National Elective Conference taking place in 14 days time.

Ramaphosa and former African Union chairperson Dr Nkosazana Dlamini-Zuma are the front-runners in the race for leadership of the 105-year-old liberation movement.

Ramaphosa is also the preferred candidate for the Western Cape, Northern Cape and the Eastern Cape, while Dlamini-Zuma came out tops in the Free State, the North West and Mpumalanga.

The crowd cheered and chanted "ANC" as their provincial chairperson's nomination was announced.

"We must restore the power of the branches," said chair of the ANC's elective commission Sindiso Mfenyana.

He added that they took the nominations from the branches to the national office to avoid any tempering with the wishes of members of the party. 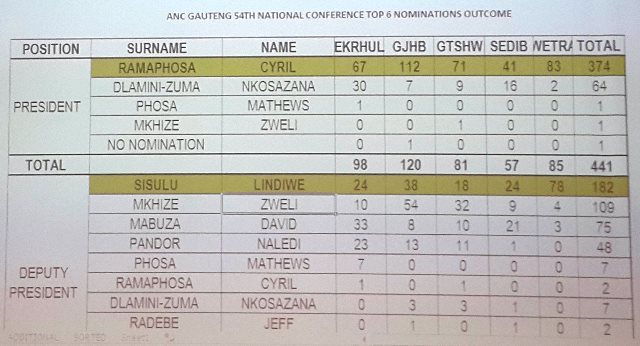