The business organisation Sakeliga today expressed its disappointment at a lackluster medium-term budget policy speech by Finance Minister Tito Mboweni.
“Minister Mboweni neglected to answer the real questions, even while admitting that hard times lay ahead. Instead he was constrained by political realities to emphasise marginal, cosmetic improvements. All this means is that the economy is likely to remain a prisoner of politics.”
“Though attempts at trimming public office-bearers benefits and salaries is admirable – the real impact of these changes pale in comparison to the current crisis.”
“The real issues remain unaddressed. In the case of Eskom, for instance, the minister had little to offer beyond the usual promises of increased scrutiny. Ultimately, Minister Mboweni could promise little beyond these cosmetic measures – because, whether he likes it or not, Eskom is still holding the economy hostage. Given the absence of market-incentives from real competition, a true turnaround of Eskom is likely to remain elusive. Whether by loans or by bailouts, the taxpayer will be saddled with Eskom’s problems for the foreseeable future.”
The same could be said on the topic of the civil service – and its ballooning wage bill. No new substantive measures were proposed. The minister could only go so far as to promise to “discuss” the matter with the labour. Given the ANC’s record in these negotiations, this is not reassuring.
It is ironic that the only assurances and firm commitments that Minister Mboweni could offer us were that state debt-levels are likely to further increase – even considering government’s optimistic projections for economic growth. As fiscal stress shows no signs of abating, Treasury’s constraints are likely to grow even more serious. 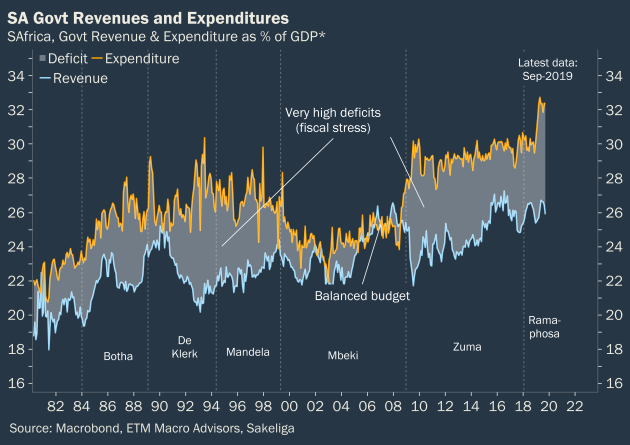