Despite South Africa’s notorious crime rate, some crimes are deemed unique and hence, are prioritized. Recent examples of this phenomenon include violence against women and children, copper theft, rhino poaching and cash-in-transit heists. Priority crimes are accepted as the consequences of such crimes may be disastrous. Copper theft creates massive damage to the South African economy, and rhino poaching can make the rhino extinct. The South African government has taken steps to specifically combat both phenomenons.

Roets is uniquely qualified to write about farm murders as Afriforum has spearheaded numerous campaigns to spread awareness about farm attacks. Moreover, he has managed to doggedly bring the debate about farm attacks into the social ether by appearing on endless public debates and mainstream television and radio shows to discuss the topic.

The book is divided into three sections: why farm murders are unique, the cultural and political landscape in which these farm attacks are occurring,and how to combat the scourge of farm attacks and proposed solutions.

The first section is littered with violent and distressing accounts from farm attacks victims and their families about the particular methods used against them while attacked. Being boiled alive, being drowned in a bathtub filled with boiling water, being stabbed 151 times with garden forks and machetes - these are just some of the torture methods used by assailants on farmers on South African farms. Within the context of the book, these scenes are not gratuitous as Roets crafts a compelling narrative that accentuates the main thrust of his argument - farm attacks are unique crimes that deserve priority.

The violent descriptions of the attacks are punctuated by robust arguments dovetailing around the uniqueness of farmers and the acts of violence themselves. Various claims are used to show how unique farmers actually are, for example, one farm murder can destroy entire communities that rely on work and produce from farmers or that less farmers can lead to scarcity, which will lead to higher premiums to other farmers, which can lead to price increases for produce. Roets’ main argument for prioritizing farm attacks rests solely on the the particular consequences of the crime that need to be prevented and, whether standard policing methods are sufficient to combat the particular crime.

Distressingly, Roets’ claims about the motivation for farm attacks, specifically those of a racial nature, are backed up by evidence. By combing through court transcripts, Roets provides evidence showing that most farm attacks are motivated by by greed and racial hatred. Some farm attackers have stated under oath that they had an immense dislike for white people while others have testified that they were motivated by political speeches. Others have written racist messages with the blood their butchered victims. The claim that farm attacks are personal feuds between farmers and workers is roundly debunked. 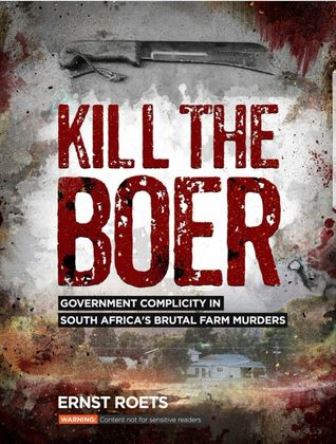 The endless squabbling about the determination of the rate of farm murders in comparison to other crimes is rigorously analyzed. An entire chapter is dedicated to debunk common misconceptions about the pro-capita rate of farm murders. While the chapter can be rather dry and technical, it serves an important purpose. Roets collates data from Afriforum, the Institute of Security Studies, the South African Police Service and other institutions to show that farmers are murdered at considerably higher rates than any other profession. Fifty-seven police officers were killed in 2017 while eighty-four farmers were killed in the same time frame. The difference is that there are over 150 000 active police officers while there are only between thirty and thirty-five thousand farmers, making farming a more dangerous occupation than being a police officer.

The most interesting aspect of the book is the section which deals with the cultural milieu in which farms attacks occur. Julius Malema, both as leader of the ANC Youth League and leader of the EFF, is prominently quoted. While any free society will allow the singing of violent chants, Roets claims that a correlation exists between the singing of “Kill The Boer” and the upward variance of farm murders generally. Malema’s more recent racist utterances calling farmers “land thieves” and “settlers” contributes to an environment that subconsciously condones racism against certain races.

Roets details how the ANC’s People’s War deemed farmers and their families to be legitimate targets of violence in the pursuit of the revolution. While the Mandela administration took steps to combat farm attacks, the subsequent administrations completely dismantled the state apparatus, such as the commando system. Contrary to popular belief, farm attacks were prioritized until 2003 until ithey were deprioritized.The consequences have been devastating.

The mainstream press is rightfully rebuked for contributing to a culture where objectivity and factual utterances are deemed secondary to a particular narrative. Prominent intellectuals and journalists, such as Eusebius Mckaiser and Ferial Haffajee, are condemned for their lack of objectivity and continued defence of racist political speech, while dismissing claims that oppose the racial lens through which they see South Africa. Evidence is provided which indicates that news stories are determined by the racial makeup of the perpetrator and victim.

White perpetrators and black victims dominate headlines while the corollary hardly makes the news. The vague and intoxicating ‘transformation’ narrative has a script and journalists have been complicit in ensuring that it remains so. An example is that of Black Monday, where thousands of people marched in public to raise awareness about farm murders. Fake pictures of people brandishing the old South African flag dominated the headlines, ensuring that the core reason for the march was subsumed to the narrative that the marchers were racists. Thankfully, in the age of social and alternative media, the mainstream narrative has started to crack and the social ether is being infused with radical new ideas. This book is an important contribution to that.

The final section of the book deal with strategies on how to combat farm attacks. Several reasonable demands are made, ranging from a consistent release of statistics to SAPS partnering with civil organizations. Members of SAPS are also woefully ill-equipped to deal with well-armed attackers. A high percentage of police officials are treated for depression while their material possessions, such as weapons and gear, are old and inefficient. More worryingly, Roets quotes data that shows that members of SAPS are often members of criminal syndicates and over 1400 SAPS members had criminal records. An anonymous source is quoted, saying that farm attacks coincided with shifts of particular officers. It persuasively conveyed that SAPS is woefully under resourced to deal with farm attacks or, are complicit in the undertaking of farm murders.

Despite all the problems quoted above, Roets’ keenly observes that private security and community networks have undertaken to perform the functions of the police, often with great success. In areas with strong community safety networks, there have been a notable decreased in farm attacks and stock theft.

A full chapter is dedicated to dismantle the white genocide myth and Roets’ affirms that such a claim is misdirected and, ultimately harmful. Genocide requires that farm attackers intended to exterminate the entire class of people known as white farmers yet the evidence shows that most attackers mention theft as their motive for perpetuating the attack. The farm attack phenomenon cannot be compared to the genocide of Armenians in 1914, or the murder of 800 000 dead Tutsis in Rwanda.

“Kill The Boer” is frustrating, depressing and ultimately, a human story about 10 000 people who have been violated at a visceral level and, to a large degree, left to fend for themselves. Roets’ book is vital for anyone who wishes to understand the farm attack/murder phenomenon within the greater context of the South African milieu. More importantly, it leaves one with a sense of great injustice.

This article first appeared in Afrikaans in Rapport newspaper.

Ivermectin approved for use in selected Covid-19 cases: Q&A