STATEMENT REGARDING CONTENTIOUS "THE LOST BOYS OF BIRD ISLAND" TWEET

I firstly wish to clarify that the tweet was sent in my personal capacity and does not reflect in any way the views of MiWay.

MiWay strives to be a good corporate citizen that embraces the diversity of cultures in South Africa and to provide exceptional service to all its clients, regardless of race, gender or culture. Please refer in this regard to hellooeter.com, where MiWay has a compliment ratio of 9.4 out of 10.

Once I became aware of the hurt and offence caused, I pasted an unconditional apology on twitter, want to repeat that apology here. I take full accountability for my actions. I should have known better. It is not in my nature to be hurtful or offensive, yet the reaction to my tweet is testament to the fact that my words did hurt and offend. I have on myself to blame for this.

In fact I regard the vast majority of Afrikaners as honourable, hard-working people who make a massive contribution to the country, in all walks of life.

I do however, believe there is a place for a constructive debate by all South Africans, including Afrikaans-speaking South Africans, about the roe we can and should play n nation building.

Regrettably, through my own doing, squandered the opportunity to stimulate such a debate - in a constructive way. That does not reduce the importance and need for such a debate. n my opinion, if nation building fails, we will all pay the price.

This experience has taught me a very hard lesson. I will learn and grow from it and hopefully be a better person.

I am fully committed to work and contribute to the building of a unified South Africa where all its citizens can fulfil their full potential. 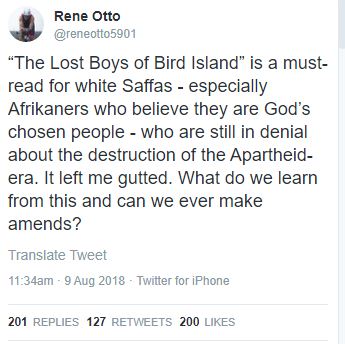