Cape Town - A small group of protesting University of Cape Town students spray painted the busts of General Jan Smuts and Maria Emmeline Barnard Fuller red on Monday, saying they did not want to see the painful symbols of white colonial repression.

Earlier on Monday, they had erected a green and silver corrugated iron shack with a portaloo and a braai area at the bottom of the university's Jamieson steps.

This was in protest over a shortage of acccomodation and they claimed that some students were being blocked over arrears.

Student leader Zola Shokane, who was part of the Rhodes Must Fall uprising last year, said there was a waiting list for on-campus accommodation, but the places seemed to go to white students.

Shokane said had been blocked from registering for the 2016 academic year.

Because of all the disruptions last year, she was not able to write. A man was also arrested and charged with allegedly sexually assaulting her during the protests last year. She had not been well enough to take this year's rewrites.

After a morning of protesting around the shack, the group then walked to the Smuts Hall mens residence nearby and stood underneath a bust of Smuts.

Student leader Masixole Mlandu said to the students: "We were brutally murdered by this person", and called for a moment of silence.

Then he climbled up and started spraying the bust red, starting with Smuts's eyes.

Some of his fellow protesters pointed out where he had missed a bit, and when he was finished two white engineering students, Steven Baxter and Rhys van den Handel, gave him a hand up in to their room.

He came out downstairs and the protesters moved over to the bust of Fuller at the womens' residence.

They decided women should spray paint the Fuller bust and after a few unsuccessful scrambles up the ivy, went around the building and finally emerged to start spraying.

Fuller was among the first four female students to enrol at the South African College in 1886 before it became the University of Cape Town.

She went on to oversee the development of the new Groote Schuur Campus and was on the university council, according to information by UCT when the bust was unveiled.

The residence was opened in 1928 and renamed Fuller Hall in 1950, two years into the rule of the National Party which entrenched apartheid.

After spray painting the bust red, the women wrapped red and white danger tape around the neck of the Fuller bust and tied it to a pillar to make it look like a noose around her neck.

"Bitch!" shouted one of the women as she tied the "noose" securely.

The people watching did not seem to know who Fuller was.

"I think if you look at the geneology of segregation and apartheid itself, it emanates from what Jan Smuts would call institutional segregation. There is a strong link and a strong history in the making of separate spaces, things like shacks," he said.

"Also, because Smuts represents, just like Rhodes, just like all of the colonialist imperialists in this country, it resembles a past which is still present in our daily reality.

"So we can not allow ourselves in 2016 to continue repeating the very same thing, while we have said the symbolism and signage of this institution is violent on black bodies."

He said Smuts and Rhodes were the epitome of the colonial conquest which the country was still grappling with.

Most of the university students walked past the structure carrying their brand new textbooks.

One groaned: "It's fees must fall all over again", and another said he supported the Fees Must Fall and Rhodes Must Fall movement, but he thought the small group was trying to achieve too much too quickly.

According to SA History Online, Smuts was a military strategist, a legal advisor to the old Transvaal government, Minister of Education, Minister of the Interior, Defence and Mines, and Prime Minister of the Union of South Africa.

He helped draft the constitution of the League of Nations, forerunner of the United Nations. He was regarded as popular with the English, but not with the Afrikaans. 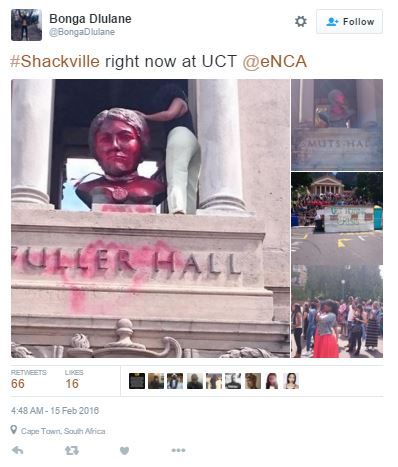 UCT staff get lower increases due to #FeesMustFall