Minister assures media of her unreserved commitment to media freedom

Minister of Communications Stella Ndabeni-Abrahams has issued an apology following an altercation with journalists when they were covering a protest action during the ANC provincial rally in Mount Frere in the Eastern Cape on Saturday.

"I would like to offer my sincere apology for an earlier altercation with some members of the media during the ANC provincial rally in Mount Frere whilst trying to stop the singing comrades," Ndabeni-Abrahams said in a statement posted on her official Twitter account.

"I wish to assure the media and South Africans at large of my unreserved commitment to media freedom. I sincerely regret the incident," she added.

According to the Citizen, a group of people wearing ANC regalia disrupted the party's treasurer Paul Mashatile during his speech at the election manifesto launch.

The publication reported that the group sang struggle songs while raising placards about poor service delivery.

Ndabeni-Abrahams was quoted as saying: "Why would you give coverage to people who are out of order?"

The SABC reported that Ndabeni-Abrahams approached its video journalist who was trying to take visuals of the protesters.

The minister allegedly put her hands in front of the camera telling the journalist not to take footage.

"SANEF has seen the video footage which was also broadcast on television stations showing the minister preventing the journalists from covering the protest and ordering them to cover what they came for and not give coverage to 'people that are out of order'," it said in a statement.

"While we note the minister has apologised for the incident, we are concerned that she refers to her actions as an 'altercation'.

"Given the minister’s high-profile portfolio relating in particular to the SABC, we would like to have an urgent meeting with her to discuss the matter and our concerns."

SANEF said it was concerned that attacks on journalists were escalating. The forum has called on political parties and those elected to lead not to "use journalists as pawns in their political infighting and/ or to cover up corruption".

"Should any person, organisation or political party feel genuinely aggrieved by a story or any actions taken by the media, they should follow the correct channels to address their grievances," it said. 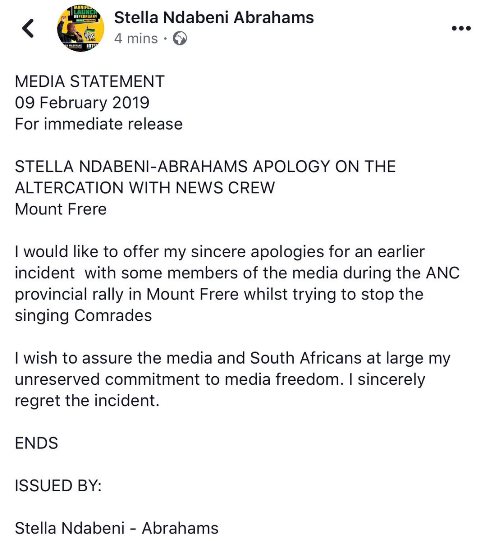 Expats, foreigner, migrant or immigrant – a hierarchy of titles that can discriminate

Another accolade as the Springboks win Laureus Team of the Year