Where did it all go so wrong?

The opportunity was too good to miss. As I drove into the basement parking to drop off some dry cleaning earlier this week another rather more eye-catching car than mine entered the garage. I couldn't help noticing the number "100" prominently displayed on the side of the vehicle in ANC colours. Being a nosy sort of bloke I decided to take a closer look so, once the driver was safely out of the way, I went up to inspect the parked vehicle more thoroughly.

It was a Mercedes-Benz E500 convertible (with Free State plates) which sells for around R1m without any optional extras. On the side of the car were the words "ANC-Celebrating 100 Years Selfless Struggle" with the ANC logo liberally displayed on various other parts of the car. The rear bumper carried the same message. Obviously I had to photograph it and put the picture up on Twitter and Facebook just to gauge reader reaction. Not surprisingly it was much the same as mine had been which was sheer disbelief.

Now, with hindsight, I suppose it's possible that the DA had a whip round, bought a very expensive convertible, covered it with this 100 year congratulatory message and are driving it around the northern suburbs in the hope of discrediting the ANC ahead of the next election.  But that wouldn't explain the Free State plates and, besides, if you want to discredit the ANC you don't drive around the northern suburbs of Joburg where the party has long been discredited.

You drive through the townships in the hope that the people on the ground might see the irony of the driver of a R1m motorcar claiming to be a member of a party involved in a selfless struggle.  But that would also be a colossal waste of time and petrol because the people on the ground have had the wool pulled over their eyes for the past eighteen years and will still vote ANC simply because it was the party that liberated them back in 1994.

In a way you have to admire the brutal honesty of anyone who plasters his high performance car with ANC decals advertising 100 years of Selfless Struggle because it perfectly encapsulates what the post 1994 ANC are all about. Long gone are all the noble ideals of uplifting the downtrodden and poor and in their place is a hard edged get rich quick culture. But it's a rather limited get rich quick culture so if you're not on the loyal cadre list forget it.

It's a culture that embraces a whole range of evils, all designed to weaken democracy and keep the riff raff in their place. The most obvious is the dubious tender system which allows well connected members of the ruling party and their relatives to win lucrative government contracts to perform tasks they are clearly incapable of. Anybody who has attempted to drive on the road to Royal Natal National Park recently will understand exactly what I mean.

It's been under construction for well over a year now so either the funding has dried up or, just as possibly, the company awarded the contract has never built a road before. It may even be (perish the thought) that part of the upfront contract payment was splurged on a Mercedes E500 convertible which didn't leave enough to pay the workers.

If you're not well connected enough to be awarded a tender you might be lucky enough to get a cushy job with a fancy title in one of the many boondoggles the ANC has set up over the years. If you're caught with your hand in the cookie jar don't despair because you will be suspended on full pay while the meandering legal process takes its course. That means you can stay at home for at least five years without having to worry about doing a stroke of work.

The problem with waste and corruption on the grand scale that we are experiencing it is that it cannot be sustained. Eventually the cupboard will be bare. I often compare what is happening in South Africa to the tins of Quality Street toffees and chocolates that used to be a Christmas treat in our household.

There were so many different coloured sweets that it was possible to pinch a couple, shake the tin, and nobody would be any the wiser. Then the sweet thieving got to a level where some of the tin began to show so it became necessary to push the remaining sweets up the side to hide the bare metal. Eventually it became obvious that persons unknown had been raiding the sweet tin which was the signal for everyone to swipe a sweet.

By that stage there was no need to cover up the crime because everybody was in on it. Our economic plundering has reached that stage. The feeling seems to be that if you don't get your share now then don't complain when there's nothing left. Since very few politicians appear to get prosecuted for corruption in this country it has become a popular way of making a fast buck with a very acceptable reward to risk ratio.

It also carries bragging rights which is why it's obviously not considered bad form to plaster the words "Selfless Struggle" on the side of an expensive car.

One wonders what Nelson Mandela, who celebrated his 94th birthday yesterday, makes of all this. Does he look fondly on the leaders of his beloved ANC, believing that they represent the true ideals of the party he fought for?  Or does he, like so many others in this country, wonder how it could have all gone so wrong? 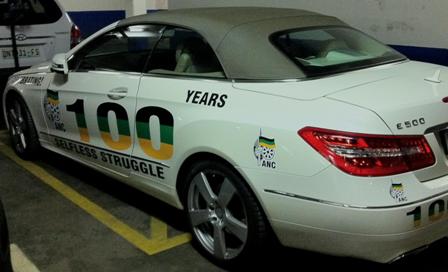 "The cock-ups were all part of the plan"