AfriForum Youth regards the reaction of the Minister of Higher Education, Blade Nzimande, on the so-called Puk incident as proof that the Minister is pushing a pre-conceived political agenda.

Before the Minister had even read the report compiled by the management of the North-West University (NWU), he had decided that a radical transformation process is the only answer to the situation. He goes so far as to emphasise that the university will not be allowed to explain the incidents away, but is expected to act decisively. Nzimande added that he had a problem with residences at Afrikaans universities in general. "Our conclusion is that Nzimande is planning on reviewing the language policy and Afrikaans character at the NWU," said Henk Maree, National Chair of AfriForum Youth.

According to Maree it is tragic that the editor of the Afrikaans paper Beeld, Adriaan Basson, had played a leading role in creating an artificial crisis which had enabled the Minister to interfere and launch his attack on Afrikaans (see report here and video below).

According to Maree Basson had become an accomplice in the radical transformation process planned by Nzimande. Maree pointed out that Basson had abused his position at the paper by digging up an old incident and presenting it as fresh news. This is sensationalism at its best. According to Maree, Basson also failed to declare his personal interest, i.e. that the lecturer at the centre of the dispute is a personal friend, with whom he had once shared a home. The lecturer has since resigned after reaching a settlement with the NWU.

"AfriForum Youth supports media freedom. But if an editor abused his powers as editor of a paper to take on a university on behalf of a friend, an in the process undermines the Afrikaans status of the university, it is no longer media freedom, it is unethical journalism," Maree said.

The picture as it appeared on the front page of Beeld: 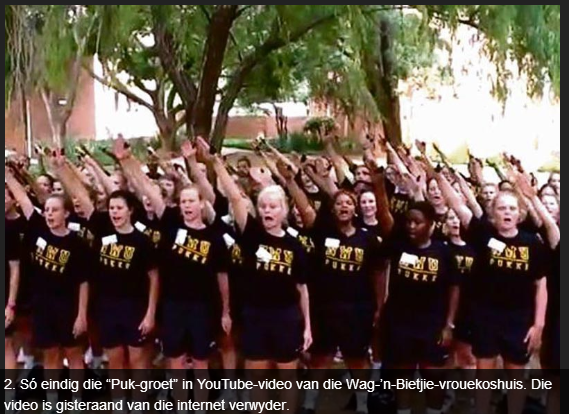 The full video from which that image was extracted:

Piet Viljoen on Ascendis, Transaction Capital and his own portfolio