I met Professor JP Duminy as a student at one point during his 10-year reign as Vice Chancellor and Principal of the University of Cape Town. I also met his wife Gwen, a charming and gracious lady who I later discovered was a graduate in Greek and Latin from Rhodes University who had come to study nursing in Pretoria where they met.

But these were little more than passing introductions. I really feel that I got to know JPD and his wife as a result of reading this book by Andrew, his son and one of my very oldest friends. After completing graduate studies overseas, my first academic appointment in South Africa was in 1965 at the University of Natal where Andrew was a lecturer in the History Department and of which in time, as a leading younger generation historian, he was appointed head. 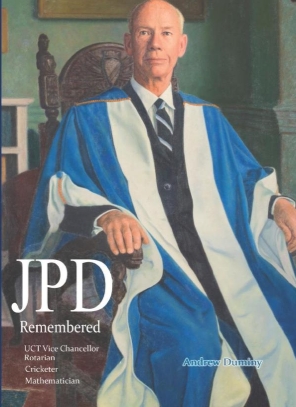 Andrew says his initial reason for writing the book was “to provide members of the family with the fullest possible account of my father's life using the diaries, private papers, photographs and notebooks that are still in our possession, supplemented where possible, by the recollection of the few people still living who knew him in person."

But as he proceeded he began to appreciate that his father was a person of many talents and of considerable historical interest with a very interesting career whose reputation had suffered “as a result of subjective contemporary prejudices relating in particular to certain events during his principalship of the University of Cape Town", and a correction was needed.

This of course refers to the Nat government of that time’s determination to close the "open" (English-speaking) universities to persons of colour and the fightback waged by the SRCs and student organisations like NUSAS and The International Students Union which Neville Rubin, the UCT SRC president at the time increasingly involved in the South African academic freedom campaign. Much like the student unrest in the US in the1960s, the most difficult positions in academia in South Africa at that time were the Principals of the "open" universities caught  between, on the one hand, increasingly radical students and, on the other, authoritarian government ministers.

Andrew, who is a very experienced historian, deftly and with very relevant detail deals with the issues which makes for a gripping read. For example, I'd forgotten Senator Robert Kennedy's visit on the invitation of student organisations to South Africa in 1966 or the Government‘s banning of the internationally-known UCT endocrinologist Raymond Hoffenberg and popular student leader Ian Robertson at that time. Caught between a ruthless government and unprecedented student agitation JPD, an academic liberal in the UCT/Oxford tradition, had a battle on his hands and with a media that was not always sympathetic. But what helped him was his considerable experience as a university administrator.

After distinguished student careers in mathematics at UCT and then as a Rhodes scholar at Oxford, JPD accepted an appointment as lecturer in mathematics at the Transvaal University College but three years later was promoted to Professor and head of the department. As Andrew points out this was not a happy appointment as the College was already feeling the effects of the Afrikaner and National Party‘s demand for "Christian national education" – an agitation that had intensified after what is today colloquially known as Wits was established in Johannesburg with English as its medium.

Brought up in the Cape in a Cape Dutch family, whose views on things like race relations and language were moderate by Transvaal standards, and given his studies at UCT and Oxford, his last years at the TUC (which became the University of Pretoria) as Andrew writes "must have been extremely unpleasant for him for he was known as a supporter of moderation and bilingualism and of Smuts‘ war policies". It would presumably also have been an extremely difficult time for Gwen who importantly, had strong political views which JPD did nothing to restrain. It must therefore, as Andrew puts it “have been an enormous pleasure and relief when JPD was appointed principal of the Pretoria Technical College in 1942, before in 1958 resigning to take up the UCT Vice Chancellorship ."

I think that from an administrator' s point of view this must have been the most creative six years in JPD‘s life. Even to read it is exciting. He dramatically increased student numbers and expanded the College‘s involvement in community interests. For example, in association with the artist Walter Battiss, he blew new life into the Pretoria Arts Association and became president of the Northern Transvaal tennis Association in the early 1940s.

This is also the time he met up with and developed a close relationship with JH Hofmeyr, close confidante of Jan Smuts, and served on several commissions relating mainly to higher education. He was in demand for public addresses to both national and international audiences. And this was also around the time he began to develop his participation in Rotary International.

As Andrew puts it: "My father's ideas were aligned almost exactly with those of Rotary. He shared its ideal that "service should come before self" and he believed that the four-way test "of truth, fairness, goodwill and better friendship embodied principles of civilised behaviour belonging to all religions that would influence people everywhere, to the benefit of the world". He would in time be the first South African to be awarded Rotary's highest honour, a Paul Harris Award and undertake numerous trips promoting Rotary all over the world. On most of them he was accompanied by Gwen, something they both appreciated as they enjoyed travel.

I think JPD Remembered will as a matter of course be read by many university administrators and academics generally because, as Andrew puts it: "For him, a ‘good education’ implied the acquisition of a breadth of vision (or broad mindedness), a tolerance of difference, an admiration for the achievements of the great scientists, philosophers and religious thinkers of the past, and a respect for other points of view." But the book’s attraction goes much further than I have indicated.

The fact is JP Duminy was a multi-talented individual whose achievements went way beyond being a great academic and university administrator. He was also an extraordinary sportsman, having rowed, played rugby and cricket for Oxford, tennis at SA provincial level, cricket at an international level, turning down for family reasons the invitation to captain South Africa, and golf for fun. I have just itemised these. Andrew Duminy makes them come alive, devoting about a third of the book to this part of his father‘s life.

How JPD‘s two older brothers on a ready-made pitch on what is now the main road through Bellville in the northern suburbs of Cape Town and just below the Duminy family farms taught him how to hold a straight bat and to receive fast bowling.

In this part of JPD Remembered, Andrew Duminy the history-writer becomes Andrew Duminy the sports-writer as he sets the bells of memory ringing. Dudley Nourse, Tuppy Owen-Smith, Russell Deane, Bruce Mitchell, Jack Siedle, Bob Catterall, Herbie Taylor and others. And on the tennis courts, Eric Sturgess and Eustace Fannin. Against this background the matches that JPD played, the runs he scored, the catches that he made and the wickets he took all come alive – as do his sense of sportsmanship.

After retiring from UCT Professor Duminy enjoyed a full life in Cape Town until his death amidst his family on 31 January 1980. What I, and I am sure others appreciate, is that he asked that a number of Dutch hymns, remembered from his childhood, should be sung and that Afrikaans should be spoken during the service.

JPD Remembered is the story of a remarkable man brilliantly and sensitively told by somebody who knows his subject. Highly recommended.

SA owes a debt of gratitude to Piet Croucamp

Racism: EFF is on ‘dangerous, path’ in Brackenfell; must be punished, says FW de Klerk Foundation

Where is the best place to buy investment property in Manchester UK?