The furore over Ashwin Willemse’s controversial studio walk-off in protest against being patronised by fellow Supersport analysts Naas Botha and Nick Mallet brought to light a few home truths about this wonderful sport that we all love and which has given us so much to celebrate over the years.

To start with, I am a diehard fan of Noord Transvaal/Blue Bulls rugby and Hendrik Ignatius Botha is one of my childhood heroes. One of my earliest childhood memories as a fan of this wondrous sport being his imperious performance in the 1987 Currie Cup final against Transvaal where he singlehandedly won the trophy for the Bulle scoring all twenty four points in a 24-18 victory.

From there on, I was to become an uncompromisingly passionate fan of Blou Bulle rugby, with heroes such as former lock Adolf Malan, the imperious counter-attacking brilliance of former fullback Gerbrand Grobler, the elusive running and finishing prowess of the “try king of Pretoria” Jacques Olivier, the silky skills of centre Jannie Claasens. This was a team I supported and loved more than any other.

In fact, one of my most painful sporting memories remains the 1990 Currie Cup final when Tony Watson famously scored a try to win Natal’s (the Banana Boys) first ever Currie Cup in a hundred years. To see Wahl Bartmann lift the trophy on that fateful day at Loftus is a painful memory that will forever be etched in me. So, not to belabour the point, but my bloed is heeltemal blou and Naas Botha was one of the first rugby heroes of my life, with the “Naas is Baas” board at a packed Newlands as Botha dominated the game against our auld enemy Western Province being a particularly fond memory.

But for all this love for rugby and for the Bulle, it appears that for us black South Africans, our love will forever remain an unrequited love as rugby people continue to patronise us and treat us as inferiors and outsiders as Willemse’s very calm protest last Saturday revealed.

I have a mate from varsity, who just so happens to be black and he has a suite at Loftus. I would often go there to watch the Bulle. I remember once coming out the suite at half time and running into a group of Afrikaner Bulle fans in the toilet and they patronisingly asked me as I entered, “when is the Orlando Pirates versus Kaizer Chiefs game?” (The assumption being that I was in the wrong place as a black fellow because in race conscious South Africa even our sporting preferences are racially polarised with soccer being seen as a “black sport” and rugby being seen as a “white sport.). 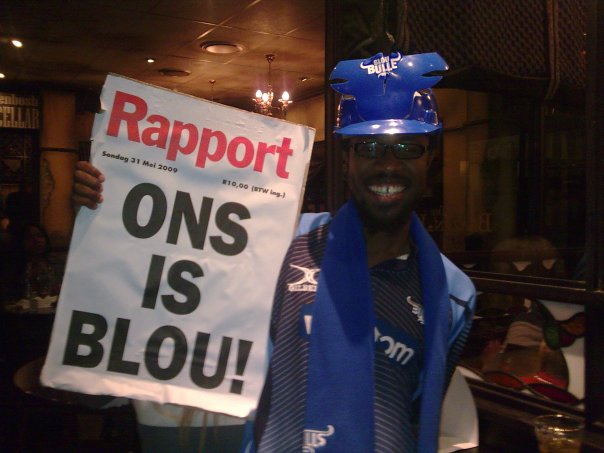 I calmly responded that I actually don’t follow or watch local soccer and in fact rugby is my number one sport, with the Bulle being my favourite team (the Blou Bulle crocs, shorts, rugby jersey, horns and scarf I was wearing at the time should surely have been a dead giveaway). But this is the type of patronising behaviour we blacks who love the game constantly have to deal with.

In my earlier life, when I lived in Cape Town, I used to live literally a minute away from Newlands rugby stadium and I would spend most of my Saturdays at the stadium supporting anyone who played against the auld enemy Western Province/Stormers. On one of these Saturdays, a female friend who just so happens to be white, went with me to watch a Stormers versus Bulls game and after that she invited me over to her parents’ home for a braai.

When we got there, with me fully kitted out in my Bulls regalia, the father was shocked and asked how someone like me could even support the Blue Bulls and what knowledge I had of the game anyway. We proceeded to have a long conversation about moments in the game from yesteryear: Morne Du Plessis’ famous late tackle on Naas Botha in the 1977 Noord Transvaal versus Western Province Currie Cup semi-final, Blue Bulls legends who existed way before I was even born (let alone started watching the game) like legendary coach Buurman Van Zyl and Mof Myburgh amongst many others.

We spoke about memorable moments in Currie Cup games of yesteryear and he was shocked at the level of detail I would have about all this. He expressed his shock that “someone like me” would have such in-depth knowledge about the game and then whipped out his old collection of videos (remember the era of videos?) so that we could actually watch some of those memorable moments we had been discussing. I was then told that I’m a “good oke” and “different” and should come over more often so we could watch rugby together and enjoy a few pints over a braai. See again, how easily we get patronised?

I had the fortunate privilege of being at the UCT rugby club on the day my old mate Luke Watson gave a speech on transformation at the Ubumbo rugby festival (a rugby club started at UCT by some of my mates to push transformation in the sport); a beautifully inclusive, insightful speech challenging us to not see transformation as just a matter of numbers on the field, but rather looking to transform our thinking, our outlook, our perspective and perceptions as a precursor to actually seeing true transformation happen in South African rugby as well as South African society.

Of course, the person who recorded Luke on that night, ended up only recording and releasing the part where he spoke about “puking on the Springbok rugby jersey”, a passing comment which was said in jest within the context of the speech and which actually was so inconsequential in light of what Watson was discussing. Of course, what made the headlines and angered the rugby establishment the next day was just that comment.

We all remember the Geo Cronje and Quinton Davids incident with all its racial undertones. So, what happened with Willemse last Saturday is not new and is just one more indicator of the outsider status that we blacks who love and support rugby are always faced with and the constant refusal of those within the game to truly transform, to truly enter the “Rainbow Nation” and stop with the laager mentality.

Rugby is a game that belongs to us all and has the potential to unite us and help us build a better nation, unlike any other sport. It would be fantastic if the game in this country would live up to those words from the rugby world cup song The World in Union (who can ever forget that brilliant rendition by P.J Powers and Ladysmith Black Mambazo in the 1995 rugby World Cup): “There’s a dream I feel, So rare, so real, All the  world in union, The world as one, gathering together, one mind, one heart, every creed, every colour, once joined, never apart…”Alas, to this far, this remains but a dream deferred when we look at the state of South African rugby.

Mugabe Ratshikuni works for the Gauteng provincial government; He is an activist with a passion for social justice and transformation. He writes here in his personal capacity.

White privilege is as real as black tax