Jon Cayzer is a professional speech writer, has a master’s in public administration from Harvard University, and is a PhD candidate on Rwanda and South Africa’s transitions of power. He recently wrote a 4 500-word piece about titled “On ‘race’, the DA is on the wrong side of history”. I disagree with his conclusions, but believe that his good-natured, lengthy, philosophical attempt to debate the issue is worth attention.

Partly that is because I am a non-racialist, but I share Cayzer’s concern that, as the party gains popularity, the DA’s non-racial policy risks falling into error. Non-racialism could become denialist, dogmatic, and impractical if its proponents are not careful. Non-racialists must try to win people over, and that starts by understanding what they think.

The great philosopher Daniel Dennett likes to say that to play tennis you need lines and a net. Similarly, in debate you need rules by which either side could win or lose. In the debate about non-racialism, sadly, both sides can be tempted to act as if they would be right no matter what the evidence.

This is an attempt to put up the proverbial net and give debate a fair shot, using Cayzer as a good example.

“It is always wrong for the state to discriminate by race”. This is the classic cri de cœur of non-racialists. If that were always true, we would be right, no matter what, and Cayzer would be wrong. But it is not always true. Perverse as it sounds, race-based discrimination must sometimes be justifiable.

To understand why, think about war, which can be defined as legalised murder. There have always been dogmatic pacifists who think war is wrong, no matter the facts, because killing a stranger is always wrong. Yet, when the Nazis came to power, even the most philosophically dogmatic passivists found themselves reaching for a “Just War” theory that would explain why legalised murder was wrong, but sometimes required.

However repulsive legalised discrimination based on race is, it cannot be as repulsive as legalised murder. So if you think war is morally justified in particular situations (I do, and so do most) then you must recognise that it must be possible to sometimes justify race-based discrimination too.

This matters in practice today because most racialists agree with non-racialists that in an ideal society the law should never discriminate by race. Proponents of legal race-based discrimination, like Cayzer, argue that our society is just so badly screwed up that, as with war, the typically abhorrent has become a demand of duty.

We could keep going, as so many have, with one side shouting, “Discrimination is wrong”, and the other yelling back, “We need counteractive discrimination because apartheid was wrong”. Put up a net and the debate becomes something both sides can win, or lose, which makes it a real debate.

The net is a pair of practical questions: is South Africa in a war-like scenario, and is that because white racists have such a command of the instruments of violence that they can unjustly, to the point of invasion, bend black people to their general will?

The cost entailed by statistical discrimination led (among other things) to arguments from economists like Milton Friedman and Thomas Sowell that competition in the free market is an effective way to combat economic racial injustice. A well-ordered market, the argument goes, will reward those who use hard facts about others to do business, while punishing those who defer to mere proxies.

Cayzer gestures at these arguments when he quotes Friedman’s famous dictum that “it costs money to discriminate”.

The problem of “taste-based” discrimination for free marketeers comes in two parts.

First, the free market is good at maximising utility under the constraints of scarcity, precisely because “utility” is subjectively defined by each buyer and seller in the market individually. There is real utility in bigotry for the “taste-based” discriminator; racism satisfies their preferences. Moreover, there is utility for others who provide bigots the “taste-based” goods and services they prefer.

If such bigots are a minority (in number and buying power) then they are likely to be punished for trying to impose their subjective preferences onto others. But if they dominate the market, the second problem comes to bear.

Insofar as a free market is utility-maximising, it will tend to maximise the subjective preferences of the majority with the most. Combine the problems of subjective utility on an individual basis and market-based utility maximisation of market dominating preferences and the problem becomes dire. The market can reinforce, not quash, bigotry. As a dictum, in a country full of rich racists, it pays to be racist too.

This point is hardly analysed because debate about South Africa’s market usually devolves into a slug fest, with non-racialists slamming BEE, while racialists tackle apartheid. Both sides are right, neither can lose, so the echo chambers shriek to an ever-higher pitch.

But put up a net and we can get practical. BEE, or something like it, must be justified if the economy is dominated by white “taste-based” bigots that crush black productivity. If, on the other hand, the market is not dominated by white bigots then race-based law should be scrapped. Who is right? You need data, not feelings or a priori arguments, to figure out the answer.

Frame the debate so that either side can win or lose, and fanatics will depart while decent folk in the middle can learn something from each other.

Guessing games won’t get the ball past either the hard power or the economic “net”, and Cayzer seems to know it. He argues that we need “disaggregated data by race”. The only two claims he puts in bold call for such data. He quotes Melinda Gates as saying that “there isn’t enough being done to disaggregate data by race, income and so many other critical markers…”

Then Cayzer asks: “Why did Gates and the Canadian government – to mention just two examples – simply not refer to ‘need’ instead of ‘race’?”

So far so good. But then, in answer to his own question, Cayzer writes the following: “The DA is the first political party in South Africa…to reject the centrality of ‘race’ as a primary identifier or indicator. The danger of replacing ‘race’ with ‘need’ is redress might be reduced to a cheap substitute for the material fortification for the victims of apartheid”.

Cayzer confuses two things, badly. On the one hand there is a need to unearth data that is disaggregated by race; on the other, the DA calls for policy that does not statistically discriminate. Is equality before the law the same thing as everyone going “colour-blind” or pretending “race cannot exist”?

If the DA was opposed to such data, you might expect it to attack the IRR for publishing polling data with racial breakdowns, as well as the annual South African Survey, a 1000-page compendium of data, much of it disaggregated by race.

Has the DA attacked the IRR for its polls or annual surveys that attend to race? No.

Has the DA attacked Stats SA for publishing demographic, employment, and income data by race? No.

Despite his pretence to yearning for data disaggregated by race, Cayzer provides none. Instead he touts anecdotes and hunches. He writes:

“People are psychologically used to viewing some, especially white men, as the 'natural' holders of positions of skill and influence. Others, especially blacks and women, are still viewed as people who, at best, have to prove themselves. Anecdotally, how many middle-class South Africans would happily agree to be operated on by a black surgeon, for example?”

Arguably the best source of this data is the IRR, which Cayzer mentions, without getting into the facts at all. I wonder why?

In the IRR’s 2018 Field Survey, a demographically representative sample of South Africans were asked the following question:

Our data show that significant numbers of people are so “psychologically” warped that they only want teachers of the same race. But the majority do not fit Cayzer’s armchair “psychological” profile on teachers, which are similar to surgeons in that they have duties of care to those most precious to us.

For more attitudinal data from the IRR, see here.

Cayzer also overlooks the hard economic data, despite “income” being the first marker sought out on “disaggregated data by race”. 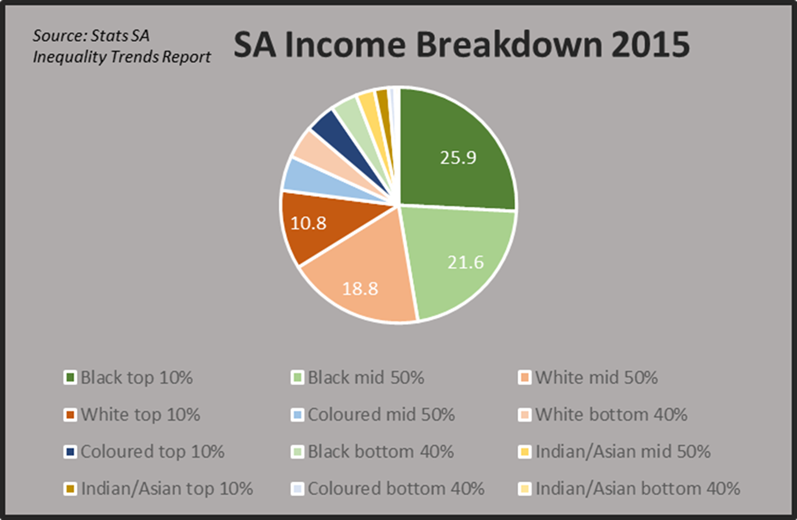 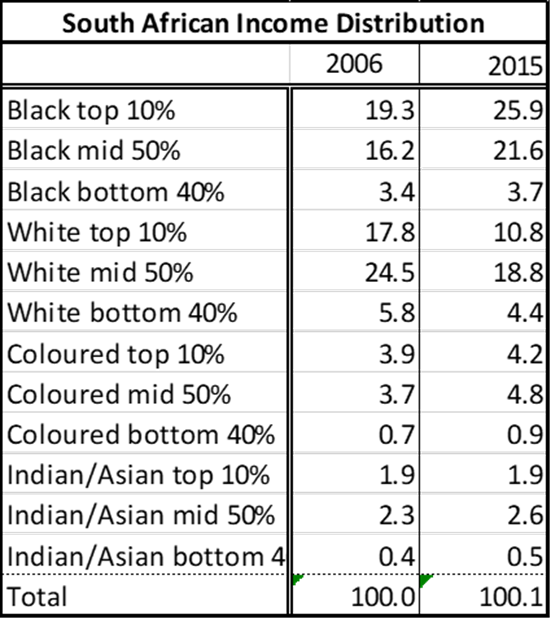 Without attending to the data, Cayzer says “the crisp issue is not whether black people still live in poverty, but whether people are still denied dignity and opportunity because they are black. The evidence ‘shouts’ that they do so.”

Evidence never “shouts”. See above. Real evidence is unemotional. It quietly shows that white people do not dominate the commanding heights of the economy.

This must be easy to ignore from an ivory tower, but try your hand at business with a “taste” for white customers, suppliers, employees and financiers and you will quickly hit the brick wall of reality.

Moreover, since South Africa has such a low capital/income ratio (meaning wealth accumulation does not happen relative to product), non-white people earn more every three years than all wealth accumulated since the beginning of time in this country. Legacy wealth does not dominate; perpetual leakage dominates the shape of South Africa’s economy.

Combine the wealth data with attitudinal data and the thesis that the economy is overwhelmed by white bigots whose “taste” for racism is maximised by the market hits the “net” of empirical reason and falls to the ground with an almost inaudible bonk.

The economy only speaks of wealth. What about power understood as the ability to coerce individuals through violence? Forty years ago, the state had a monopoly on legitimate force, which it used to stop black people from voting, seeking public office, and working, living or owning in freedom.

Today South Africa is an all-race democracy in which white people are less than 10% of the population and an even smaller sample of Cabinet, the armed and police forces, and the apex court, to name a few examples. Most citizens are my age or younger; most of us do not have a job, and almost none of us can remember a day when the most powerful people in this country were anything but black.

The thesis that hard power is so asymmetrically tilted in white people’s favour that we are in a war-like (apartheid-style) scenario and therefore that the state simply must, however reluctantly, discriminate against whites, hits the empirical net. It falls to the ground.

Racialists can try to pick the ball up and get it over – this time for real, by serving new data. Or they can burn the net and hope no one else minds going from debating to feeling.

Non-racialists also face the temptation of abandoning contextualism – which admits that discrimination is wrong only within practical limits – in favour of simpler moral slogans like “never discriminate!”.

Do that and you only help racialists burn the empirical net they cannot use data to overcome.

Gabriel Crouse is a writer and analyst at the Institute of Race Relations (IRR), a liberal think tank that promotes political and economic freedom

Expropriation Bill: The devil lies in the details