The family and friends of  Denis Norman gathered at All Saints Church at Middleton Stoney, Oxfordshire, England today (January 8, 2020) to honour the late and many say great Denis Norman, who died after a two- year battle against cancer which led to his death on December 20.

Mourners were led by his wife, June, who shared with her husband the ups-and-downs of family, farming and political life for 64 years, first in Rhodesia where they married in 1955  and then in Zimbabwe from 1980 to 2003 when they decided to leave Africa and begin a new life together in England.

For a long time, Denis Norman was the country's most popular and high profile white.

He was also one of the key brains behind the creation of the Beira Corridor Group that opened up new rail and road links to Mozambique at a time when apartheid-ruled South Africa had such economic and military clout in Central and Southern Africa.

Denis Norman will also be remembered by older Zimbabweans as the man who re-assured Europeans and non-blacks that they all had a secure future in Mugabe's Zimbabwe after a protracted war that cost something in the region of 35,000 African lives.

When the 250,000 or so worried whites heard on a radio broadcast that the man they most feared had a human face after all and  that he had appointed the President of the all-white Commercial Farmers Union (CFU) Denis Norman to be the country’s first Minister of Agriculture they were at first stunned and then delighted.

Few knew that it was Lord (Christopher) Soames (the last governor of Southern Rhodesia) who virtually ordered Mugabe to make the appointment of the Englishman Denis Norman to agriculture and a Scot called David Smith to Trade and Commerce in order to re-assure the white community and prove to Britain, the Commonwealth and the rest of the world that Prime Minister Robert Mugabe was sincere about his declared wish to nurture racial and political reconciliation in a war-torn country.

“Denis Norman’s appointment was inspired,” said one of Zimbabwe’s best known farmers, John Laurie. “He was apolitical and with his agricultural experience, he immediately set about the task of building agriculture up to be the leading sector of the country’s economy.” 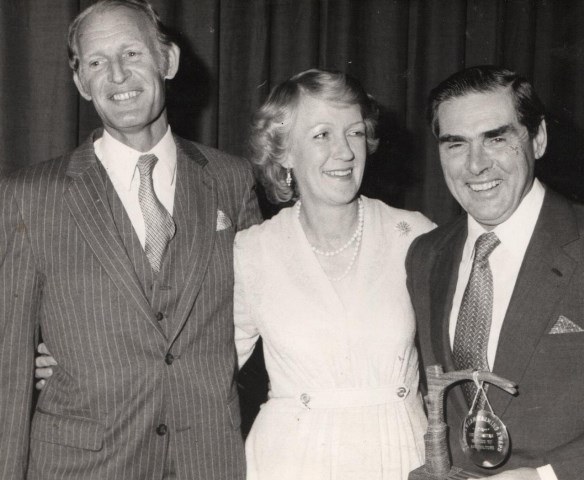 Left to right: John Laurie, President of the Commercial Farmers Union  with June Norman and Denis Norman who in 1981 was awarded the prestigious Farming Oscar for his services to agriculturee in Zimbabwe (Picture courtesy of Alexander Joe).

Most Africans also welcomed the CFU head aboard the new ship of state.

His deputy in 1980 was the widely respected Simba Makoni who praised Norman for not only venturing into the explosive post-war political arena but also for making what he called “an immense contribution, not only to agriculture, but to reconciliation between blacks and whites.”

During the five years Denis Norman ran Agriculture the country was not only self-sufficient in food but also a net exporter to the other eight countries in the then important regional economic grouping, the Southern African Development Community (SADC).

Norman soon became one of Mugabe’s most respected and listened-to ministers.

So much so that he entrusted this dedicated white man to escort the communist despot Nicolae Ceausescu around Zimbabwe during his five day state visit in 1983.

He suggested that the visitor, his wife and large group of officials be shown around farms. Which ones asked Norman? The best said Mugabe.

Norman showed the Rumanian one of the country’s finest dairy farms. After a thorough inspection of the farm and its immaculate herds, Ceausescu turned to Norman and said – “I’ll take it.”

The quick- thinking Norman realized Ceausescu was under the impression a farm would be Mugabe’s way of saying thanks for all the military and other support Rumania and the Soviet Union countries had given to the struggle for freedom during the Rhodesian War.

Politely but firmly, Denis Norman said that the farm, sadly, was not up for sale.

Ceausescu, who rarely asked for anything twice, said he didn’t want to buy it. He would accept it as a gift from the Zimbabwean Government.

Norman passed this particular buck to his boss, Robert Mugabe and years later wrote in his biography “The Odd Man In” (Weaver Press, Harare, Zimbabwe , 2018) -“ I do not know what passed between them subsequently, but I got the impression that the relationship quickly cooled considerably.”

Denis Norman’s contribution to racial reconciliation has never been fully appreciated. But between 1980 and 1985 the partnership between Robert Mugabe and Denis Norman made sense of independence and inspired meaningful and well-planned land reform.

Mugabe admitted he knew little about farming and so he paid attention to the words and the wisdom of a man who did.  Watching and warming to the former CFU leader Robert Mugabe could be forgiven for thinking that all whites had a bit of Denis Norman in them.

How wrong he was.

In 1985, the small but still economically influential white community, voted almost to a person for Ian Smith’s party at the second general election.

Mugabe – furious – cut his nose off to spite his face.

He sacked Denis Norman and David Smith and told the whites that his reconciliation gesture was over. They had spurned his hand of friendship.

Norman returned to his farm, an unfairly dismissed but far from defeated Zimbabwean Lucius Cincinnatus.

But the going got tough and the man at the top looked for Denis Norman once again.

As Chairman of the Beira Corridor Group (BCG) he had thought up ingenious ways of re-routing Zimbabwe’s imports and exports away from South Africa towards those in neighbouring Mozambique which was ruled by FRELIMO under the leadership of President Samora Machel.

In 1992 he had to take on Energy as well as Transport and amazingly in 1995, Mugabe called him into his office and asked him to once again take-over the Agriculture portfolio.

He stayed there until 1997 when Mugabe came under increasing pressure to print money to provide handouts and pensions to veteran freedom fighters.

Three years later, with nothing left to give, he turned on white farmers and stole the land they had bought legally after independence, the early days when reconciliation meant something. 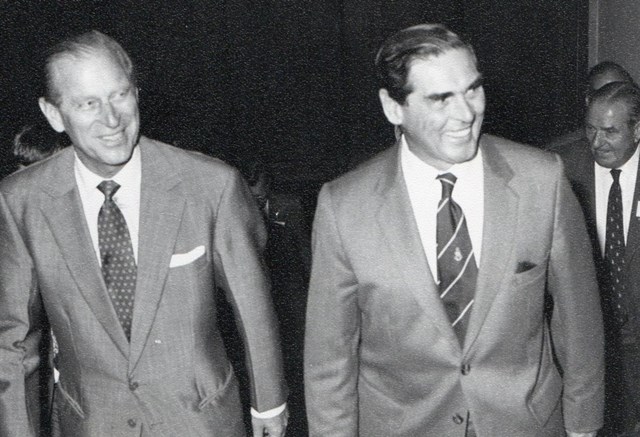 The Duke of Edinburgh with Denis Norman at Meikles Hotel on the eve of the opening of the 1991 Commonwealth Heads of Government Meeting ( CHOGM) attended by Queen Elziabeth 11 and Nelson Mandela. (Picture: Trevor Grundy)

Denis Norman was born on March 26, 1931 at Chalgrove Manor in the village of the same name in Oxfordshire. He was the second of three sons to farming parents. In 1942 he was sent as a border to All Saints School, Bloxham where he excelled as a sportsman but not so much an academic.

With farming in his blood, he worked first alongside his father and brother at Middleton Stoney, Oxfordshire. In 1953 he decided to follow his older brother John to Rhodesia, landing there on November 11, inexperienced, new to Africa but young and a man determined to make a success of the two to three years he planned to be away from England.

In 1954, Denis first saw Salisbury-born June Marshall whose grand-father was one of the Pioneers who opened up Rhodesia after 1890. Denis said she was “the most beautiful woman I’ve ever seen in my life.

enterprise and a quite large equally well--run family of four - Kathryn Millett (a travel consultant), Diana Skea (a charity administrator), Howard (a financial planner) and Deborah Digby, (owner of an art gallery).

It was with huge reluctance that Denis and June Norman decided to leave the country they loved and helped build. But after the land invasions of 2000 life became unbearable for them and most other whites.

But the Normans had somewhere else to go unlike the thousands of blacks displaced by Mugabe’s draconian and most violent land grab.

One of the last people he said goodbye to was Mugabe.

Mugabe said Norman should go for a few years and then return.

In his memoir, Norman writes - “At this point, I diverted the conversation by asking him where they country had all gone wrong. Again, he looked surprised and said – ‘Has it all gone wrong?’ I countered by saying I knew it had, and he knew it, but the question was, why was this so?”

Denis and June lived first in southern England, then to Oxfordshire where he had his roots and where he wrote his memoirs and almost until the day of his death he remembered with a mixture of affection and regret the way Robert Mugabe had arrived on the scene with such promise, such hope and left behind him a wrecked farming system in an ill-fated country.

Who put Mugabe into power?

Mugabe and the white minister