Jerm writes on being a cartoonist in our day and age

Hi, my name is Jerm. I am South Africa’s 39th best cartoonist.

My strength is neither speaking nor writing, but I am unable to draw a picture worth the number of words in this instance. So, please bear with me.

My career began in 2005, a few years after failing art school. Since then, nearly 7000 cartoons of mine have appeared in publications locally and abroad; I’ve won a few awards; and I’ve published a couple of books. My personal worldview is dictated by a set of values and principles stemming from individual liberty; reason; and freedom from coercion.

Furthermore, I judge individuals based on the content of their character rather than the colour of their skin. I can’t quite pin it, but I’m sure I remember there being a man who once had such a dream.

In 2009, a guy threatened to murder me. He emailed me for weeks, describing - in detail - how he was going to shoot me and then hand in his gun. He even quoted creepy lines from violent movies. Following his refusal to leave me alone after receiving a letter from my lawyer, he was arrested at his house and put into a holding cell until his parents paid his bail a few days later. I haven’t heard from him again. (The Charlie Hebdo cartoonists weren’t as fortunate.)

Google’s definition of satire is “the use of humour, irony, exaggeration, or ridicule to expose and criticise people's stupidity or vices, particularly in the context of contemporary politics and other topical issues.” For the most part, thankfully, people have understood satire for centuries. That said, there is a vocal minority that evidently doesn’t understand satire. And remembering that offence - generally speaking - can’t be given, and can only be taken, I find this “outrage” somewhat baffling (and manufactured, dare I say) because it suggests that a group of individuals are deliberately choosing to be offended.

So, is there a line? This is probably the most commonly asked question in the world of cartooning. Answers vary, but mine tends to gravitate around “no, not really”. What might offend me might not offend you, so a universal line isn’t plausible. A subjective line, or rather, a subjective guideline, seems more appropriate, and is largely determined by which battles I’m willing to fight (which is also largely determined by the zeitgeist).

Consider the following cartoon I did in 2012, after Whitney Houston’s death. 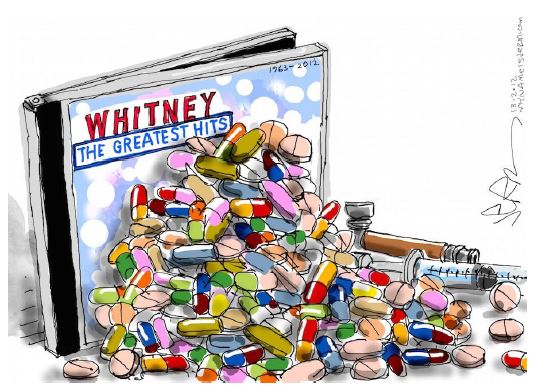 The editor didn’t publish the cartoon the next day because, according to him, it was offensive and would have triggered angry letters. Ironically, he published the cartoon three days later (with not a single complaint), which indicates that the aforementioned line is not static. I don’t see how the cartoon is offensive, anyway. The coroner's report revealed that she died of a drug overdose.

Or how about the next cartoon that I drew months ago, but which suddenly appeared in The Citizen last week when the online editor, Daniel Friedman, decided to include me in a piece about local YouTuber, Willem Petzer. 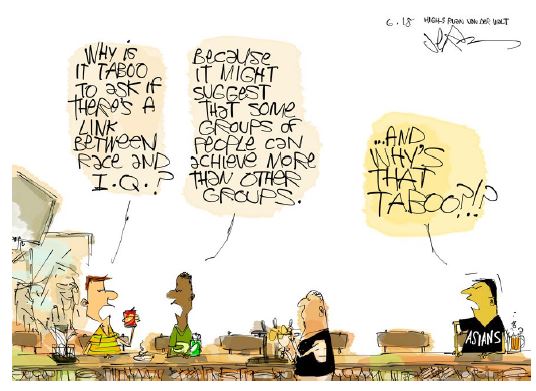 Mr Friedman’s exposé was about a set of racist memes found in an online chat room - and I agree that the memes are vile and racist - but the chat room and memes were completely unrelated to me.

The cartoon itself merely lampoons the unscientific idea of multiple human races. In other words, there is one human race and the differences found between humans are consequences of climate, environment, culture, and so on. Ironically, journalists and politicians regularly perpetuate the ‘multiple races’ myth through racialised reporting and commentary. It is true that the topic is taboo in many circles, but a topic being taboo is quite a good reason to poke fun at it. Progress is pivoted on open discourse instead of sweeping stuff under the carpet by lazily resorting to labels like “racist”. 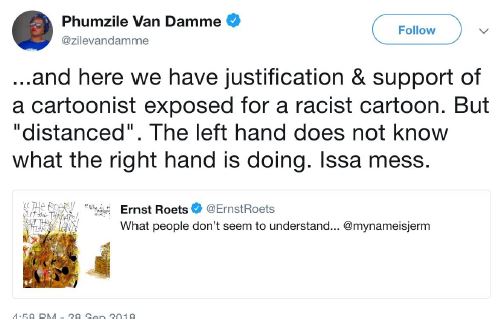 So, when the DA’s former national spokesperson, Phumzile Van Damme, tweets about my cartoon being “racist”, it’s evident that Ms Van Damme is part of the aforesaid outrage culture for whom satire probably isn’t best suited. Especially since she’s known to throw around the term when she isn't happy about something. Like the time she accused a fully-booked Durban restaurant of being racist because it wouldn’t give her a table, and then quickly made an about-turn when a table became available a bit later.

I filed a complaint and The Citizen has since removed its inclusion of me and my cartoon above.

To quote Thomas Sowell, “the word ‘racism’ is like ketchup. It can be put on practically anything, and demanding evidence makes you a ‘racist’.”

In closing, I put it to you, honourable Barry, that satire is a thermometre gauging the temperature of a democracy. The more that satire is oppressed, the less democratic a country becomes. Don’t let outrage culture send us back to apartheid, a time in which drawn lines were quickly erased.

The media vs AfriForum