Last week, Bruce Muller, a branding agent, founded an initiative called ‘Awake SA’, a website and Facebook community dedicated to ‘waking up’ white South Africans to their privilege. According to a News24 article, Muller founded the project in response to recent events in South African society, amongst which the Penny Sparrow-Chris Hart-Gareth Cliff fiasco is, apparently, included. The vehicle for this ‘waking up’ is a ‘Pledge’ in which white South Africans ‘acknowledge’ their privilege, dedicate themselves to fighting racism, and ‘giving back’ to the community.

We, the authors, are writing this article in response to what Awake SA seeks to do, and what they have published since their establishment. Inspired by their calls for open and honest engagement, we will address what they regard to be one of South Africa’s biggest problems, referring specifically to their arguments, and also to those forwarded by critical race theorists in general.

An Open and Honest Discussion

Calls for open and honest engagement on the topic of race and identity, and the role it plays within the South African context, have been widespread since the end of the Apartheid era. However, it is often forgotten, or overlooked, that race and identity have been critically interrogated during the lifespan of the former regime. Entities such as the Institute of Race Relations and the then-Progressive Federal Party did not come to the conclusion that all individual South Africans, regardless of race or ethnicity, should be treated equally in the face of just law, on a whim. The black consciousness movement was also founded during the height of the National Party’s power. It is therefore important, going forward, for us to acknowledge that race has been discussed and hotly debated (both constructively and destructively) within South African civil society.

Awake SA’s goal of making South Africans more politically-conscious is laudable; this objective is largely shared by the Rational Standard. Moreover, issues of race can be significant, and should be explored in an open and honest manner - as they have been before.

Awake SA’s manner of doing things, however, seems backwards: taking the ‘Pledge’, as the website suggests, is a pre-requisite for joining their community and learning more about white privilege. This is problematic for any initiative or project which aims to educate and facilitate introspection, since it appears to pre-emptively define the boundaries (and perhaps, conclusions) of thought and opinion, rather than allow exploration and independent learning.

It is important to consider how Awake SA intends to facilitate an open and honest discussion around white privilege if, from the outset, it requires engaging whites to acknowledge their white privilege. If the participants acknowledge their privilege and declare their intention to help with the combating of racism and the advancing of social justice, is the exercise not futile?

Indeed, it appears as if Awake SA simply seeks to gather pledges. Any pledger who rejects the notion of white privilege after having ‘signed up’ and internalised the underlying theory advanced by Awake SA, exposes himself to accusations of hypocrisy. This, ostensibly at least, appears to negate the idea that these discussions will be ‘open’ and ‘honest’.

This raises an important question: to what extent will dissenting views (if at all) be tolerated? Dissenting viewpoints are important in discussion and education - which Awake SA seeks to facilitate - and present a healthy opportunity for both sides of a debate to strengthen their arguments.

Before Awake SA continues in its mission, we recommend it considers the following statement made by an unnamed student of philosophy:

“It is the view that it is impossible to be incorrect about the reality of ‘white privilege’ or one’s attribution of it to particular cases. Anyone who disbelieves in it does not see the issue clearly enough, or cynically benefits from it, or endorses white privilege.

Are we allowed to come to the conclusion that white privilege does not exist? Or may we perhaps conclude that white privilege is not a problem? Can we say either of these things without being considered, as a default position, ignorant or malicious? If Awake SA’s answer is ‘yes’, then it is clear that it is committed to an honest discussion on the topic. If the answer is ‘no’, then Awake SA has predetermined the outcome of its initiative, which has the effect that it is not a ‘discussion’ or an ‘engagement’, but rather a lecture.

The Dominant Narrative: the media and intellectuals

This section of our argument will not touch directly upon anything that Awake SA is claiming. Instead, we believe this is relevant to the broader context of the ‘social justice’ community to which Awake SA ostensibly belongs.

Advocates of social justice have claimed, quite consistently, that the South African press media act as defenders of the status quo, which is likely considered to be the system of ‘white supremacy’. A basic understanding of Marxian theory would reveal the parallels: white supremacy is the ‘base’, and the media is part of the ‘superstructure’ which supports the base. Part of this superstructure, of course, is the business community, the Democratic Alliance, AfriForum, the court system, and according to some, even the African National Congress government. 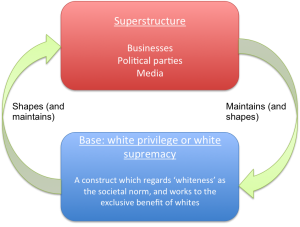 In Marxian theory and its derivatives, society comprises a 'base' and a 'superstructure'. In terms of racial power relations, this composition is thought to be as shown in the diagram above.

However, we have discovered quite the opposite to be true. Awake SA’s establishment was reported in News24 within a week of its founding. News24, as we know, is a subsidiary of Naspers - a company often accused of being a financial beneficiary of Apartheid. It has been referred to as an Afrikaner megacorporation.

Nonetheless, here is a guardian of white Afrikaner monopoly capital, giving good press to an initiative which seeks to expose the very foundation it wants to protect! And, certainly, this is not a once-off occurrence: News24 Voices has been the host to many a social justice advocate’s essay, and these have, in fact, come to dominate the opinion-editorial columns of most of the South African press media.

Building on the dominance of the social justice narrative in the press media is its widespread support in intellectual circles. This is not necessarily limited to academics at public universities, but includes civic ‘thought leaders’ and community activists, such as the founders of Awake SA. We are of the opinion that this school of thought is certainly not marginalized, and represents the intellectual status quo.

Indeed, Awake SA’s initiative is predicated on the idea that social conflict along racial lines is at a zenith. This, too, is indicative of the Marxian roots of Awake SA’s underlying point of departure. ‘Class conflict’ is a central theory in Marx and Engels’ works, and purportedly exists on a perpetual basis between socio-economic classes. It is accepted that this ‘conflict’ has the potential to turn violent.

Neither of these scholars pointed to a tangible example of what was described in the class conflict conception, though, and there has also not been such an instance since their death. An entire philosophical movement, known as the Frankfurt School (‘Critical Theory’), was established to examine and explain why this conflict never erupted.

Nonetheless, intellectuals and civil society in South Africa have transposed this notion of class conflict onto the race debate, and have long since accepted its premises. Clearly, Awake SA is of the opinion that a state of ‘social conflict’ exists between white and black South Africans. The Institute of Race Relations reported earlier this year that the majority of South Africans, of all races, believe that race relations have improved since the end of the Apartheid era.

On the ground, in schools, in friend circles and on the street, there is no ‘social conflict’. The ‘conflict’ exists in statistics based on false premises, in academic studies, and only according to certain academic theories. Indeed, when Oxfam reported recently that a very small minority of the world’s population owned the majority of the world’s wealth, no riots or outrage occurred among the common man, but only among those with an academic interest in it. While inequality may present various issues, none of them are based in ‘conflict’, or in race.

Marx paradoxically spoke about the inevitability of class conflict and struggle, while insisting that it was the role of intellectuals to create the ‘consciousness’ needed to bring about the opposition. Those intellectuals who would paint race relations in South Africa as being significantly worse than they are, run the risk of fulfilling that role - thereby manufacturing the conflict themselves.

We have not gone to great lengths to address Awake SA’s specific arguments related to white privilege in this article. However, this is intentional. This piece stands to set the tone for the open and honest debate we hope to have with initiatives such as Awake SA and its partners on the concept of white privilege.

We have addressed two central points we believe must be stated at the outset of the engagement: the premise of ‘open and honest’ discussion, and the fact that we do not engage from a dominant and widely-supported perspective. We believe we offer an alternative narrative to that which currently dominates. One thing is for certain: the debate around white privilege is, contrary to popular opinion, far from settled.

This article first appeared on the Rational Standard website – here.

The myth of white privilege

Rhodes and white privilege: A reply to Rodney Warwick

Renault Kiger 1.0 Turbo Intens: Should the Vitara Brezza and Sonet be worried?