The Medium Term Budget Policy Statement, tabled in Parliament on 28 October 2020, projects that the government will need to issue above 50% more short-term and long-term domestic debt in 2020/21 than in 2019/20. This elevated level will persist for two more years. And, as the Minister of Finance pointed out, the risks to this baseline projection are to the downside.

Can the target be met? And what are the macroeconomic implications of doing so?

THE BASELINE PROJECTION AND THE RISKS

Table 1 sets out the baseline projection.

Annexure A to the Medium Term Budget Budget Policy Statement sets out the risks to this projection. They are:

The possibility that the economic recovery will not be strong enough to allow for the full withdrawal of temporary support under the COVID-19 fiscal support measures, particularly if there is a second wave of the epidemic.

A high likelihood of further rating agency downgrades, which would put upward pressure on funding costs.

A further reduction in non-resident holdings of domestic debt.

A depreciation of the rand, increasing the rand value of foreign debt service payments.

Subnational government risks in the form of medico-legal claims, unpaid provincial invoices and the poor financial situation of municipalities.

Inability of the state to hold the line on public sector wages.. Both the upcoming decision on the final year of the current wage agreement and the upcoming wage talks pose significant risks to the expenditure ceiling.

The National Treasury has quantified some, but not all, of the effects of these risks on gross loan debt in 2020/21.

The public wage sector bill impact has the potential to snowball in succeeding years and pressures for SOE bailouts may continue to climb. 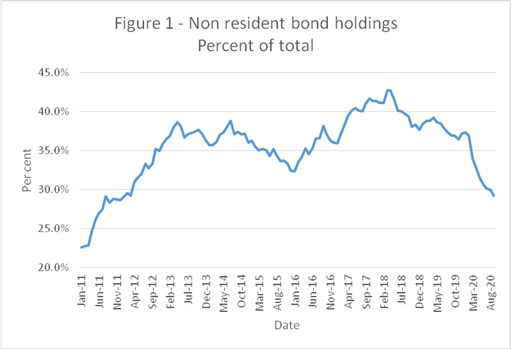 In addition, the rand value of foreign debt was R 350.0 billion in June 2020, 11.5% of all government debt. Adverse moves in foreign sentiment will depreciate the rand, increase the debt service costs of foreign loans and throw more of the financing burden on domestic lenders. All foreign lenders and investors are looking for the same two things: a reduction in the probability of debt default and a credible path to higher growth.

2. Domestic absorption capacity. The decrease in the proportion of domestic debt has been compensated for mainly by an increase in the proportion held by banks and, to a lesser extent, by other financial institutions, including unit trusts and finance companies. The MTBPS Annexure A points out that 15.3% of total banking assets are government bonds now, up from 7.7% a decade ago. If adverse moves in foreign sentiment develop, questions will arise about the willingness of banks and other financial institutions to shoulder the increased financing burden, leading to a drop in the bid to cover ratio (the ratio of all bids for government bonds to bonds allocated in auctions) leading to upward pressure on interest rates.

3. The Reserve Bank. Reserve Bank policy is not to intervene by influencing the market rate of interest on government debt, but to act as purchaser of last resort in the event that spikes in the interest rates arise from disorderly market conditions. Disorder would arise in the event of a much reduced willingness to bid from other purchasers. In making emergency purchases, the Reserve Bank would increase the stock of money with potentially inflationary consequences, with implications for monetary policy. It would be an induced form of quantitative easing.

Financing of baseline government debt will be tricky enough. Forced additions to it will lead to mutually reinforcing higher than expected rand depreciation, a higher government debt yield curve, putting upward pressure on debt service costs, and higher inflation. This in turn will increase interest rates, choking off the investment on which the government is relying for improved growth. Avoiding these developments will require both good luck and a steely determination by the government to stick to its MTBPS commitments. The prospects for that determination will be discussed in a later brief.

How coherent are the 2020 production and labour market data (I)

Social grants and unemployment insurance during the lockdown

The Fall of UCT: An interview

Will Zuma finally tell all?

Are disruptors the new kid on the global equity investment block?

Magnus Heystek on land expropriation, mandatory vaccines and how it may affect your finances

"Magnus Heystek on land expropriation, mandatory vaccines and how it may affect your finances" - BizNews