Extract from the German Führer und Reichskanzler's speech to the Reichstag, 30 January 1939

The following is an extract from perhaps the most infamous speech in human history. It is the address of German Führer und Reichskanzler, Adolf Hitler, to the Reichstag on 30 January 1939.

The New York Times report on the speech, the following day, focused on Hitler’s acknowledgement of the poor state of the German economy – “Indubitably, Germany is and has been in a particularly difficult economic situation” – and his complaints that this was due to Germany’s unjust deprivation of her colonial possessions after the First World War.

The newspaper quoted him as saying, “To assume that it was permitted by the Lord God to a few people [plainly he means the British and the French] first to take possession of the world by force and then to defend their robbery by moral theories is perhaps comforting and above all easy for the possessors; but it is immaterial and uninteresting and non-binding for the have-nots.”

The newspaper’s correspondent did not, however, recognise the full significance of or highlight Hitler’s extensive comments on the ‘Jewish Question’ in his address - though an extensive transcript of the speech was published elsewhere in the paper.

After the war a particular prophecy made by Hitler on this matter acquired a truly horrific significance in hindsight.

This section of the speech follows below. It is a reminder, if one is needed, of how racial hatred, in its most extreme form, is propagated; and what this can then lead to.

SPEECH DELIVERED BY ADOLF HITLER BEFORE THE GERMAN REICHSTAG ON JANUARY 30, 1939

The German Nation has no feeling of hatred towards England, America, or France. All it wants is peace and quiet. But these other nations are continually being stirred up to hatred of Germany and the German people by Jewish and non-Jewish agitators. And so, should the warmongers achieve what they are aiming at, our own people would be landed in a situation for which they would be psychologically quite unprepared and which they would thus fail to grasp.

I therefore consider it necessary that from now on our propaganda and our press should always make a point of answering these attacks, and above all, bring them to the notice of the German people. The German Nation must know who the men are who want to bring about war by hook or by crook.

It is my conviction that these people are mistaken in their calculations, for when once National Socialist propaganda is devoted to answering of the attacks, we shall succeed just as we succeeded inside Germany herself, in overcoming through the convincing power of our propaganda the Jewish world-enemy.

The nations will in a short time realize that National Socialist Germany wants no enmity with other nations, that all the assertions as to our intended attacks on other nations are lies, lies born of morbid hysteria, or of a mania for self-preservation on the part of certain politicians, but that in certain states these lies are being used by unscrupulous profiteers to salvage their own finances. That above all, international Jewry may hope in this way to satisfy its thirst for revenge and gain, but that on the other hand this is the grossest defamation which can be brought to bear on a great and peace-loving nation.

Never, for instance, have German soldiers fought on American soil unless it was in the cause of American independence and freedom. But American soldiers were brought to Europe to help strangle a great nation which was striving for its freedom. Germany did not attack America, but America attacked Germany, and, as the Committee of Investigation of the American House of Representatives concluded, from purely capitalist motives, without any other cause.

But there is one thing that everyone should realize: These attempts cannot influence Germany in the slightest as to the way in which she settles her Jewish problem. On the contrary, in connection with the Jewish question I have this to say:

It is a shameful spectacle to see how the whole democratic world is oozing sympathy for the poor tormented Jewish people, but remains hardhearted and obdurate when it comes to helping them, which is surely in view of its attitude, an obvious duty.

The arguments that are brought up as an excuse for not helping them actually, speak for us Germans and Italians, for this is what they say:

They assure us: we cannot take them unless Germany is prepared to allow them a certain amount of capital to bring with them as immigrants.

For hundreds of years Germany was good enough to receive these elements, although they possessed nothing except infectious political and physical diseases. What they possess today, they have by far to the largest extent gained at the cost of the less astute German Nation by the most reprehensible manipulations.

Today we are merely paying this people what it deserves. When the German Nation was thanks to the inflation, instigated and carried through by Jews deprived of the entire savings which it had accumulated in years of honest work, when the rest of the world took away the German Nation's foreign investments, when we were divested of the whole of our colonial possessions, these philanthropic considerations evidently carried little noticeable weight with democratic statesmen. Today I can only assure these gentlemen that, thanks to the brutal education with which the democracies favoured us for fifteen years, we are completely hardened to all attacks of sentiment.

After more than 800,000 children of the nation have died of hunger and undernourishment at the close of the war, we witnessed almost one million. head of milking cows being driven away from us in accordance with the cruel paragraphs of a dictate which the humane democratic apostles of the world forced upon us as a peace treaty; we witnessed over one million German prisoners of war being retained in confinement for no reason at all for a whole year after the war was ended. We witnessed over one and a half million Germans being torn away from all that they possessed in the territories lying on our frontiers, and being whipped out with practically only what they wore on their backs. "We had to endure having millions of our fellow countrymen torn from us without their consent and without their being afforded the slightest possibility of existence.

I could supplement these examples with dozens of the most cruel kind. For this reason we ask to be spared all sentimental talk. The German Nation does not wish its interests to be determined and controlled by any foreign nation. France to the French, England to the English, .America to the Americans, and Germany to the Germans.

We are resolved to prevent the settlement in our country of a strange people, which was capable of snatching for itself all the leading positions in the land, and to oust it. For it is our will to educate our own Nation for these leading positions. We have hundreds of thousands of very intelligent children of peasants and of the working classes. We shall have them educated. In fact, we have already begun, and we wish that one day they, and not the representatives of an alien race, may hold the leading positions in the state together with our educated classes.

Above all, German culture, as its name alone shows, is German and not Jewish, and therefore its management and care will be entrusted to members of our own Nation. If the rest of the world cries out with a hypocritical mien against this barbaric expulsion from Germany of such an irreplaceable and culturally eminently valuable element, we can only be astonished at this reaction. For how thankful they must be that we are releasing apostles of culture and placing them at the disposal of the rest of the world.

In accordance with their own declarations they cannot find a single reason to excuse themselves for refusing to receive this most valuable race in their own countries. Nor can I see a reason why the members of this race should be imposed upon the German Nation, while in the states, which are so enthusiastic about these "splendid people ", their settlement should suddenly be ref used with every imaginable excuse. I think that the sooner this problem is solved the better, for Europe cannot settle down until the Jewish question is cleared up.

It may very well be possible that sooner or later an agreement on this problem may be reached in Europe, even between those nations which otherwise do not so easily come together. The world has sufficient space for settlements, but we must once and f or all get rid of the opinion that the Jewish race was only created by God for the purpose of being in a certain percentage a parasite living on the body and the productive work of other nations. The Jewish race will have to adapt itself to sound constructive activity as other nations do, or sooner or later it will succumb to a crisis of an inconceivable magnitude.

One thing I should like to say on this day which may be memorable for others as well as for us Germans: In the course of my life I have very often been a prophet and have usually been ridiculed for it. During the 'time of my struggle for power, it was in the first instance the Jewish race which only received my prophecies with laughter when I said that I would one day take over the leadership of the state, and with it that of the whole nation, and that I would then, among many other things, settle the Jewish problem.

Their laughter was uproarious, but I think that for some time now they have been laughing on the other side of their face. Today, I will once more be a prophet: If the international Jewish financers in and outside Europe should succeed m plunging the nations once more into a world war, then the result will not be the bolshevization of the earth, and thus the victory of Jewry, but the annihilation of the Jewish race in Europe, for the time when the non-Jewish nations had no propaganda is at an end: National Socialist Germany and Fascist Italy have institutions which enable them, when necessary, to enlighten the world about the nature of a question of which many nations are instinctively conscious, but which they have not yet clearly thought out.

At the moment the Jews in certain countries may be fomenting hatred under the protection of a press, of the film, of wireless propaganda, of the theatre, of literature etc. all of which they control. If this nation should once more succeed in inciting the millions which compose the nations into a conflict which is utterly senseless and only serves Jewish interests, then there will be revealed the effectiveness of an enlightenment which has completely routed the Jews in Germany in the space of a few years.

The nations are no longer willing to die on the battlefield so that this unstable international race may profiteer from a war or satisfy its Old Testament vengeance. The Jewish watchword "Workers of the world unite!" will be conquered by a higher realization, namely, "Workers of all classes and of all nations, recognize your common enemy!'' 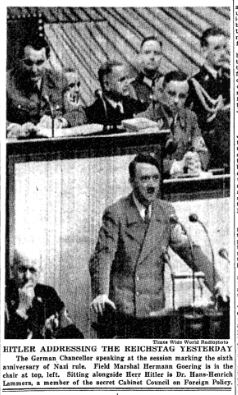 Malema: Adolf Hitler has come back from the dead - Buti Manamela

What the British thought of Hitler in 1922

Wokeism and cancel culture: Is the tide rising against it?

US Senate: ‘Establishment Covid-19 narrative is a lie’